Iraq's Constitution: Implications for Iraq and Beyond

The endorsement of the new constitution, by the Iraqi people through a referendum in October of this year, marked a significant milestone in the modern history of Iraq. The development of the constitution was itself a contentious process and its nature was reflected in the voting patterns during the referendum. There remains the possibility that some aspects of the constitution may yet change in the coming weeks and months, and it is to be hoped that in the light of broader representation in the National Assembly following the recent elections, the requirements of all parties to the constitution can be adequately met.

As the basis for a stable Iraq, an agreed-upon constitution is of great importance not only for the citizens of Iraq, but also for its neighbors and other countries of the Arabian Gulf region. As a populous and militarily strong Arab country on the Arabian Gulf, Iraq has been seen as both an ally and a security threat. While Iraq remains unstable, hindering redevelopment towards a stable and prosperous society, it will remain a security threat to its neighbors.

The importance of a unified and stable Iraq was recently highlighted at the GCC summit in Abu Dhabi when the Gulf leaders urged the Iraqi people to reach a “comprehensive national reconciliation” in order to ensure its territorial integrity and stability. In the interests of furthering this process the GCC states promised to continue their support for reconstruction.

The symposium provides an occasion for a fruitful discussion of regional and Iraqi concerns about the new constitution, and how the political renewal will evolve and develop within Iraq. 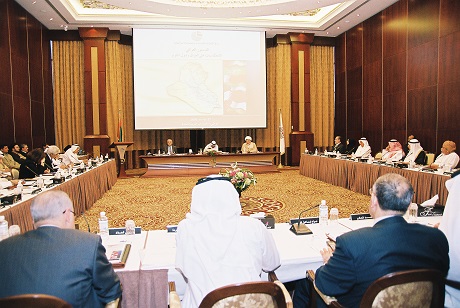