Since the terrorist attacks by Islamic extremists on September 11, 2001, in the USA, and the subsequent campaigns waged by the Washington administration and its allies against so-called rogue states in a context of asymmetric conflict, there has been a structural change in the communication of crises by the globally networked mass media. Western broadcasters (CNN, BBC, ARD, ZDF, DW-TV), particularly in the predominant TV sector, are now being joined by new media names in the form of Arab news channels in the competition to provide information—examples are Al-Arabiyya in Dubai and Abu Dhabi TV in Abu Dhabi, United Arab Emirates, and Al-Jazeera in Doha, Qatar.

For some years now, a new Arab media base has been developing in the Gulf region; it is referred to as “Dollywood” in an allusion to the business centre Dubai and is similar to the “Hollywood on the Nile” in Egypt. The new generation of Arab mass media is considered by many western news media to be a reliable and credible external source. This is evident from the numerous quotations and the footage from Arab programs to be found in the western media. It also suggests that inroads are being made into the global monopoly hitherto held by American and European TV broadcasters in reporting on conflicts in the Near and Middle East. The result is a considerable impact on the public in matters of international relations.

Both sides, however, the new Arab and the western media worlds, convey their own conflict perspective against the backdrop of their own cultural background. Different viewpoints often lead to intercultural friction. Arab and western media frequently accuse each other of allowing themselves to be manipulated by their respective governments into publishing or broadcasting anything from political PR (public diplomacy) to state propaganda.

Based on the new trends in the global media, it would seem appropriate – in the tradition of previous German-Arab Media Dialogue events run by the Institut für Auslandsbeziehungen (ifa) – to explore the topic “Globalization and Media Cultures” and analyze the politico-cultural foundations for different conflict perspectives and their influence on the selection and presentation of media content, for example, news.

For example, many Arab media use the same Arabic word for Palestinian suicide bombers in Israel as for victims of violent conflict, namely ‘shahid’ or the plural ‘shuhada’, which means ‘passed away’, but also ‘martyr’. Use of this term is perceived in the West as taking sides with the Palestinian cause. By contrast, some western media often employ euphemisms coined by the military forces and refer to the Israeli army’s operations against alleged Palestinian terrorists as ‘target killings’ instead of the more correct designation ‘assassinations’. Intercultural friction results from inaccurate translation equivalents in the language of the news and from disruptions in communication within cultural and political power relations. One such communication dilemma relates to holding the power to define the terminology for the diffuse phenomenon of international terrorism. What western media calls ‘war against terrorism’ is referred to in the Arab media as, roughly translated, ‘US war against so-called terrorism’.

Some internationally operating media in the West and the Arab world are acting on the slogan of ‘globalization’ and trying to conquer new regional and local markets and acquire new target audiences beyond the boundaries of their own cultural and linguistic space by broadcasting content in other languages.

Another strategy is that of trans-cultural media cooperation: given the Franco-German example of ARTE, the European cultural channel, it would be perfectly conceivable for a cross-border European-Arab television broadcasting station to be established. Ideas for such exchange and cooperation could be forthcoming from this proposed German-Arab Media Dialogue.

This meeting will also examine the discordant symbiosis in the operations of the media and the military in reporting on conflict, crises and war within a context of censorship and self-censorship. One matter worthy of discussion here is the extent to which Arab and western media simply indulge in up-to-the-minute reporting or instead choose to report on the backdrop of longstanding structural problems in international relations as the real cause of conflict.

This German-Arab Media Dialogue will essentially examine the interdependencies between the new Arab media world and the western media world and investigate the influence which these exert on the quality of global crisis communication. 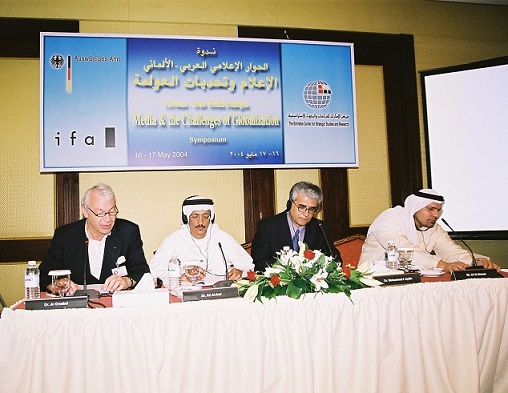