The examination of issues related to the Arab Gulf region on the strategic, security, and future levels receives special attention from the Emirates Center for Strategic Studies and Research (ECSSR). Accordingly, the ECSSR devotes many of its activities such as conferences, symposiums, workshops, lectures, and publications to cover this vital topic.

Traditional as well as newly emerging interrelated factors have contributed to bringing this region into the forefront. Among the factors that have made this region a top priority of the major powers are the massive oil reserves, the strategic location, the war on terrorism and the geographical proximity of the region to current hot spots or potential hot spots such as Iraq and Iran.

All such considerations have pushed the ECSSR, a research institution of the highest caliber, to seek to crystallize a much clearer vision, based on the geographic location and strategic position of the Gulf states within the system of international relations which is governed by many rapidly changing variables, following the developments of global events and interests. Within this context, the ECSSR organized a symposium on “the International Interests in the Gulf Region”, which hosted an elite group of experts on international issues and Middle Eastern affairs from the United Arab Emirates, Arab countries, Russia, France, Germany, the US, and the UK. Over the period of two days, they examined topics such as: 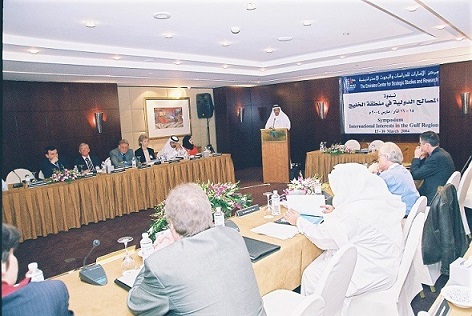