The Emirates Center for Strategic Studies and Research (ECSSR), in collaboration with the University of Maine, organized a conference entitled: ‘The Global Financial Crisis and Future Outlook,’ which was held on November 26-27, 2012, at the Sheikh Zayid bin Sultan Al Nahyan Hall, in the office complex of the ECSSR in Abu Dhabi.

The conference, which was attended by a distinguished group of experts and specialists, both from the UAE and the US, commenced with Welcoming Remarks by His Excellency Dr. Jamal Sanad Al-Suwaidi, Director-General of the ECSSR. The Keynote Address was delivered by US Ambassador to the UAE, Michael H. Corbin. On Day Two, the Keynote Address was delivered by His Excellency Khalid Al-Boustani, Assistant Undersecretary for International Financial Relations, Ministry of Finance, UAE.

The two-day conference deliberated on a number of critical issues and subjects. Panel I discussed the economic and institutional impact of the financial crisis, while Panel II delved into the political and social consequences of the financial meltdown, in terms of the shift in global centers of power, the ensuing political and social unrest and the impact of the crisis on the education process. Day Two opened Panel III of the Conference entitled: ‘The Future of World Economy After The Crisis’ that covered the political, economic and social dimensions of the subject. The discussion panel concluded with the role of the GCC in the new world economy and the affect of the shift in power centers on GCC countries. 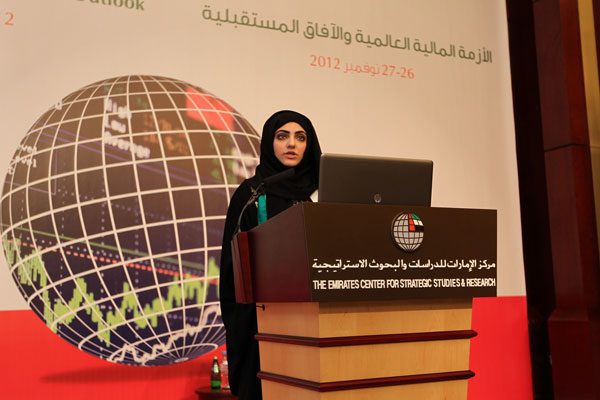