The Growing Turkish Role in the Arab World and Its Implications

The Growing Turkish Role in the Arab World and Its Implications

This lecture tries to identify the main dimensions of the shift in Arab-Turkish relations in recent years and the motivation for this shift at the domestic level of both parties. By defining the shift, we can find out the causes behind the growing Turkish role in the Arab world, in view of the events taking place in our Arab region, and in light of political, military, and other developments, especially at the regional and international levels.

Certain favorable factors, such as the developments in the Arab region, the focus of major powers on purely security and economic issues, and the nearly complete absence of regional and international economic and political blocs and organizations, have enabled Turkey to play an active political and economic role in its regional sphere. This role has included influencing some conflicts and events taking place in its immediate or distant neighborhood, sometimes through mediation and sometimes through direct intervention.

This lecture tries to define the nature of the role that Turkey plays or seeks to secure, and explain its political, economic, and strategic dimensions in general and their impacts on the Arab world. 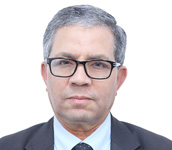 Former ambassador of the Republic of Tunisia to the Czech Republic, Republic of Côte d'Ivoire, and Kingdom of Bahrain
Tunisia