Her Excellency Chancellor Angela Merkel said that the United
Arab Emirates is currently Germany’s most important trade
partner in the Gulf region and that Germany will remain
committed to enhancement of economic cooperation with
the UAE. She emphasized the need to expand existing
cooperation especially in the field of education. She shed
light on the historic European experience in establishing
a civilized model based on a unique political culture of
dialogue and renouncement of violence. She discussed
the evolution of the European Union (EU) structures and
its relations with world powers and regional emerging
powers across the world. She also discussed the activities
of the EU and its role in maintaining security in conflict
zones. However, she said that the EU will not succeed in its
endeavors unless its military might is combined with its civil
efforts to solve current conflicts. She touched upon the issue
of climate change and the importance of globalization, as
it now a collective responsibility to work toward an energy
policy. She also discussed the role of Germany in this regard
in its capacity as the current holder of the Presidency of the
European Union. She considered the two–state solution of
the Palestinian-Israeli conflict, crucial in bringing stability
to the region. She praised the Beirut Declaration issued
by the Arab League Summit recognizing Israel’s right to
exist. She reiterated the need for Iran to cooperate with the
international community regarding its nuclear ambitions—
otherwise international sanctions will be imposed. She also
alluded to the Syrian role in Lebanon. 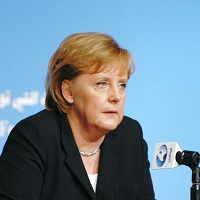