Water and Food Security in the Arabian Gulf

With a rapidly expanding world population, rising food prices, and shrinking agricultural acreage due to increasing scarcity of water resources, water and food security has emerged as one of the most serious challenges facing today’s governments, including those of the GCC. Arab Gulf countries do not have sufficient natural water resources, and mainly rely on sea water desalination to satisfy their requirements. They also import most of their food, which makes fluctuating food prices a major factor of economic and social instability in the region.

In recognition of the importance of this issue at both the regional and international levels, the ECSSR will convene its 17th Annual Conference under the title: Water and Food Security in the Arabian Gulf.

The conference will be organized under the generous patronage of His Highness General Sheikh Mohammed bin Zayed Al Nahyan, Crown Prince of Abu Dhabi, Deputy Supreme Commander of the UAE Armed Forces and President of the ECSSR, on March 26–27, 2012. It shall consist of five sessions, comprising 16 lectures delivered by a group of prominent experts, academics, researchers and officials from the UAE, the Gulf region and beyond.

On the first day, the conference will address: strategic dimensions of water in the Arabian Gulf, with a special focus on the current regional and international status of water resources; challenges facing the management of water resources; and the impact of economic development and population growth on existing resources.

On the second day the speakers will address: food security, including the challenges facing global food supplies, and food security strategies in the Arabian Gulf; the economics of agriculture and food; and the impact of rising food prices on the Gulf countries. The conference will conclude with a session dedicated to discussing strategies to ensure water and food security in the United Arab Emirates, with an emphasis on efforts to ensure national sustainable development. 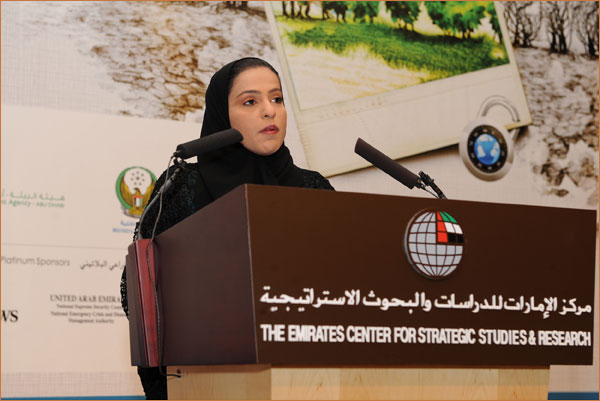