The Gulf: Challenges of the Future

The Emirates Center for Strategic Studies and Research (ECSSR) organized its Ninth Annual Conference amidst a period that witnessed significant changes upon the regional and international levels. The world stage has been marked by successive developments and changes that have taken place at a precipitous rate, with significant effects upon the internal situations of the Gulf states, the relations of those countries upon the regional and international level, and upon Gulf inter-relations.

The onset of 2004 has witnessed many forums and gatherings, which have sought to monitor and analyze recent developments that have taken place in the region, whose effects have extended to bear upon all the world. However, The Gulf: Challenges of the Future Conference, organized by the ECSSR from 11-13 January 2004 in Abu Dhabi, has received the greatest amount of interest and follow-up on the local, regional, and international levels. The conference monitored and analyzed changes and developments that have recently influenced the region and its countries, not only from a political angle, but also from a wider strategic perspective, which did not overlook influence upon any level, be it economic, military, social, technological, media, educational, or otherwise.

The conference, which hosted high-level political and academic personalities from differing parts of the world, teemed with many important ideas and original theses that will undoubtedly crystallize in future political and academic policies and activities. The most important finding of the conference was, by nature, anticipatory. Many participants expressed concern, drawing a number of scenarios and forecasting the future of the Gulf states in regards to their inter-regional and international relations upon many levels. 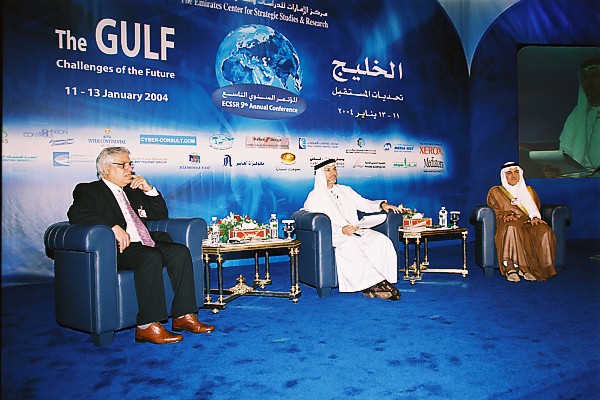