The Seventh Annual Conference entitled “Human Resource Development in a Knowledge-Based Economy” was organized under the auspices of and in the presence of His Highness Lt. General Sheikh Mohamed bin Zayed Al Nahyan, Chief of Staff of the UAE Armed Forces. In line with the ECCSR’s policy of inviting prominent international personalities to the opening sessions of its annual conferences, the keynote address of the Conference was delivered by His Excellency Hamid Karzai, Head of the Interim Government of Afghanistan.

Knowledge and human capital are seen as critical to the success and growth of any organization and form the building blocks for the economy of the future. Likewise, they are a vital necessity for the building of nations. Hence, the keynote address by His Excellency Hamid Karzai focused on the efforts to be made by his government in the future to build a new Afghanistan on the basis of human capital, and to build a strong knowledge-based economy, which is one of the pillars of a modern state.

The theme of the Conference falls in line with the continuing efforts of the ECSSR to provide a forum to discuss strategic issues that strengthen the building of modern societies and planning for future policies based on sound science and research. 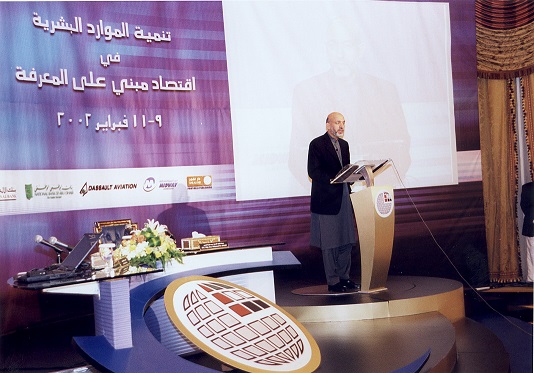