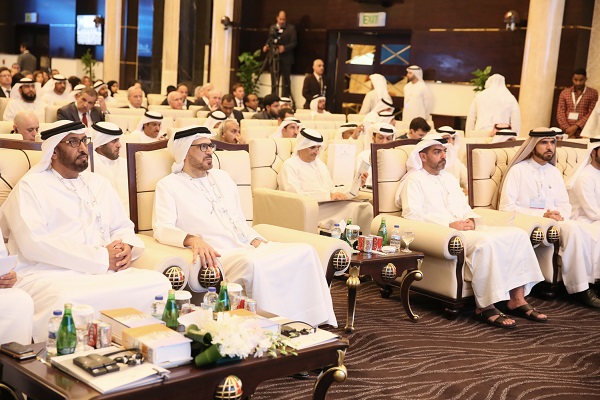 The Emirates Center for Strategic Studies and Research (ECSSR) will convene its 21st Annual Energy Conference on November 24–25, 2015, at its office complex in Abu Dhabi, UAE under the title; "GCC Oil in World Energy Markets: Continuity and Change".

For decades, the oil produced by the Gulf Cooperation Council (GCC) countries has been a central pillar of the global energy market, providing others with a convenient and reliable source of energy, which in turn, has encouraged further economic development worldwide. This year’s conference will examine the Gulf oil industry in light of key economic, technological and geopolitical developments. It will consider ways in which the relative importance of Gulf oil may have in fact eroded; while also evaluating a number of factors that serve to underline the enduring significance of the GCC states for the world energy markets.

The conference will comprise four panels, each featuring three individual presentations. The first panel, “GCC Oil in World Energy Markets: Present and Future,” will focus on several domestic and international factors that determine the nature and extent of GCC oil production and exports. The second panel, “Global Economic Change and GCC Oil,” will assess the impact that prominent global energy market developments have had upon global oil prices and production rates.  The third panel, “Technological Development and the Future of GCC Oil” will examine the influence that technological advancements have exerted over the supply and demand side of GCC oil. The final panel, entitled “The Impact of Geostrategic Factors on GCC Oil”, will focus on the delicate interplay between energy production and geostrategic rivalries.

Under the patronage of His Highness General Sheikh Mohammed bin Zayed Al Nahyan, Crown Prince of Abu Dhabi, Deputy Supreme Commander of the UAE Armed Forces and President of the Emirates Center for Strategic Studies and Research (ECSSR), the ECSSR organized its 20th Annual Energy Conference - Future Energy Trends: Innovation, Markets and Geopolitics - on November 18–19, 2014, at its office complex in Abu Dhabi.

This year’s conference addressed ways in which production and distribution of the world’s energy resources are being transformed by the introduction of innovative new technologies and policies. It considered the effects of technological development on conventional energy markets, discussed the prospects for unconventional and renewable energies, and traced the economic and geopolitical consequences of these transformations for the Gulf region and the world.

The conference comprised four panels, each featuring three sessions. The first panel, “Innovation and Conventional Energy Sources,” put forward options for meeting long-term energy needs and discussed ways to shape and sustain our energy future and mitigate its environmental impacts. The second panel, “Innovation and Trends in Unconventional and Renewable Energies,” highlighted the growing role of unconventional oil and gas, with particular reference to the recent boom in US production, as well as the latest trends in renewable technologies and their potential applications in the cities of the future. The third panel, “Emerging Geopolitical Developments and Competition,” discussed global and regional geopolitical developments and their potential effects on global energy markets. The fourth and final panel, “Energy Market Developments and their Effects on the GCC,” explored market dynamics and policies, with a focus on political, economic and environmental factors influencing the policies of governments and industry. 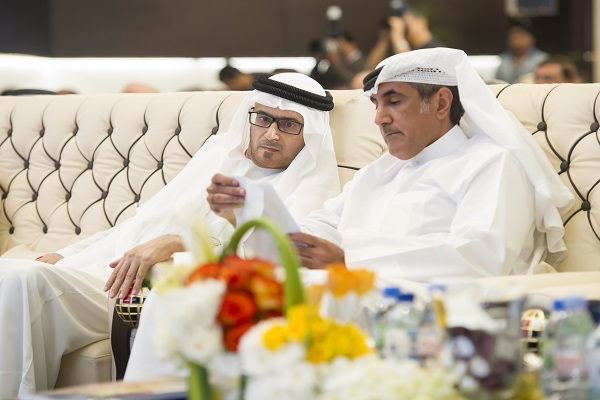 Under the patronage of His Highness General Sheikh Mohammed bin Zayed Al Nahyan, Crown Prince of Abu Dhabi, Deputy Supreme Commander of the UAE Armed Forces and President of the Emirates Center for Strategic Studies and Research (ECSSR), the ECSSR organized its 19th Annual Energy Conference under the title ‘Unconventional Fossil Fuels: The Next Hydrocarbon Revolution?’ from October 29-30, 2013, at its office complex in Abu Dhabi. The rise and competitiveness of unconventional fossil fuels, considered by many as long-term ‘game changers’ in the world of energy, was addressed during the conference. Their influence on global energy dynamics, supply and demand and geopolitics, as well as their prospective role in the future of energy and its related implications for the oil-producing countries of the Arabian Gulf and the global energy industry as a whole was also examined during the conference.

H.E. Suhail Mohammed Faraj Al-Mazroui, Minister of Energy, UAE, delivered the Keynote Address, which was followed by the opening panel on ‘Unconventional Fuels: Geopolitical Consequences for the Arabian Gulf and the UAE’. This panel included presentations on ‘Implications for Global Energy Markets and Gulf Producers’, ‘The US Energy Revival’ and ‘Shifting Power: From Traditional Oil and Gas Producers to Consumers and New Producers’. The second panel – ‘The Future of Unconventional Fuels in the Asia-Pacific Region’ – included papers on important areas such as ‘China’s Shale Gas Ambitions’, ‘Japan’s Development of “Flammable Ice”’ and Ramifications for Asia–GCC Energy Relations. 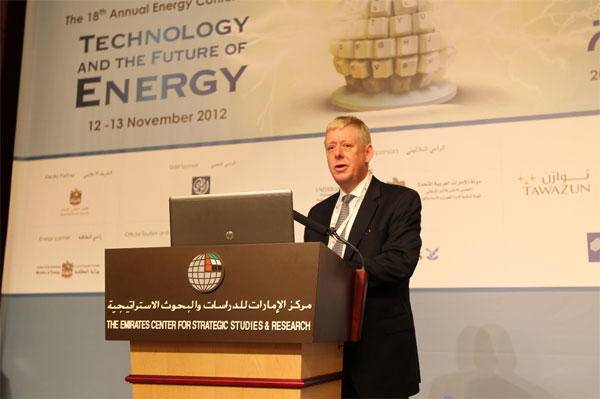 The ECSSR 18th Annual Energy Conference identified prevailing trends in the development of energy technologies with the aim of charting their potential role in shaping the future of world energy demand and supply. It also evaluated the impact of technology on the future of energy in the Arabian Gulf region specifically and the global energy sector as a whole.

The first day of the conference addressed the role of technology in the global energy system. It examined the dynamics of changes in global energy supply and demand, as well as investment trends in energy technology. It also investigated the impact of technological development on energy self-reliance among countries and regions, after which the focus shifted to prevailing trends in the development of energy technologies and their associated impacts on various aspects of the oil and gas, nuclear, and renewable energy sectors.

On the second day of the conference, discussions were held on technological challenges and opportunities in energy-intensive sectors, reviewing potential applications for emerging technologies and their projected costs in the areas of power generation, construction and housing, transport and communication, and manufacturing and industry. It then assessed the potential implications of new technologies for the oil-producing countries of the Arabian Gulf, providing in-depth analysis of political, social, economic, financial and environmental considerations.

Under the patronage of His Highness General Sheikh Mohammed bin Zayed Al Nahyan, Crown Prince of Abu Dhabi, Deputy Supreme Commander of the UAE Armed Forces, and President of the Emirates Center for Strategic Studies and Research (ECSSR), the ECSSR held its Seventeenth Annual Energy Conference, “Global Energy Markets: Changes in the Strategic Landscape,” on November 1–2, 2011, at the Center’s office complex in Abu Dhabi. Participants at the Conference included decision makers, academics, researchers and distinguished local and international energy experts.

The Conference addressed prevailing trends in global energy markets, as well as the challenges and future prospects for different segments of the current energy system, including oil and gas, renewable and nuclear energy sectors.

The event offered two days of high-level presentations and in-depth discussions designed to provide valuable insight into the most critical energy issues affecting security, the economy, and the environment. On the first day, the Conference identified the key challenges and potential trends for global energy markets, as well as their policy implications. It also examined potential market effects which may influence world energy pricing and trade, the global oil and gas market, the economic viability of renewable energy, and the economics of nuclear power.

On the second day, the Conference focused on energy market analysis and energy security. It tackled major issues for global energy markets raised by recent developments such as the global economic downturn, the ongoing changes in the Middle East, the growing fears over climate change, and the Fukushima nuclear disaster. The Conference concluded by focusing on the GCC countries and their energy policies, as well as their role and market power in the global energy system, providing geo-strategic solutions to oil vulnerability in the Arab Gulf.

The intensifying global quest for low-carbon energy solutions has failed to undermine demand for oil and gas, which is projected to continue growing strongly in the years ahead. However, many of the leading oil-consuming countries have already adopted targets for reducing their dependency on imported fossil fuels while simultaneously pursuing alternative energy sources including, in some cases, nuclear energy. This changing global landscape has raised important questions about the long-term future of oil and its role in the world economy.

With this in mind, the ECSSR 16th Annual Energy Conference seeks to examine the emerging, contemporary challenges of the oil era and subsequently both the role of oil as a primary source of energy and its place in the broader energy equation.

The first day of the conference will identify key factors shaping the present discourse on oil. It will consider the dynamics of global demand and the resulting implications for Middle Eastern producers. The discussion will then move on to an examination of the significance of climate change and its consequences for oil policies worldwide. Furthermore, the drive for new energy technologies will be evaluated in terms of its repercussions for the energy sector.

The second day will begin with an in-depth discussion of the interplay between oil and the global economy, followed by an investigation of oil market trends in the context of the changing realities of the international economic order. The focus will then shift to strategic issues surrounding the evolving geopolitics of oil.

The third day will seek to determine the future of oil by assessing its prospects in the shifting global energy system of the 21st century. The conference will conclude with a discussion focusing on the development and management of the Arabian Gulf’s energy sector, including an analysis of the respective contribution of each source of energy – namely oil and gas, nuclear and renewables – to the region’s future energy mix. 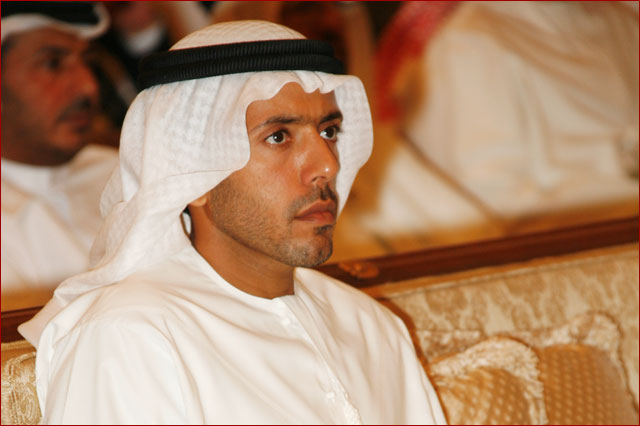