ECSSR ECSSR NewsEntering “2020: Towards the Next 50” with an Ambitious Vision Emirates Center for Strategic Studies and Research Makes Outstanding Achievements in 2019

Entering “2020: Towards the Next 50” with an Ambitious Vision Emirates Center for Strategic Studies and Research Makes Outstanding Achievements in 2019 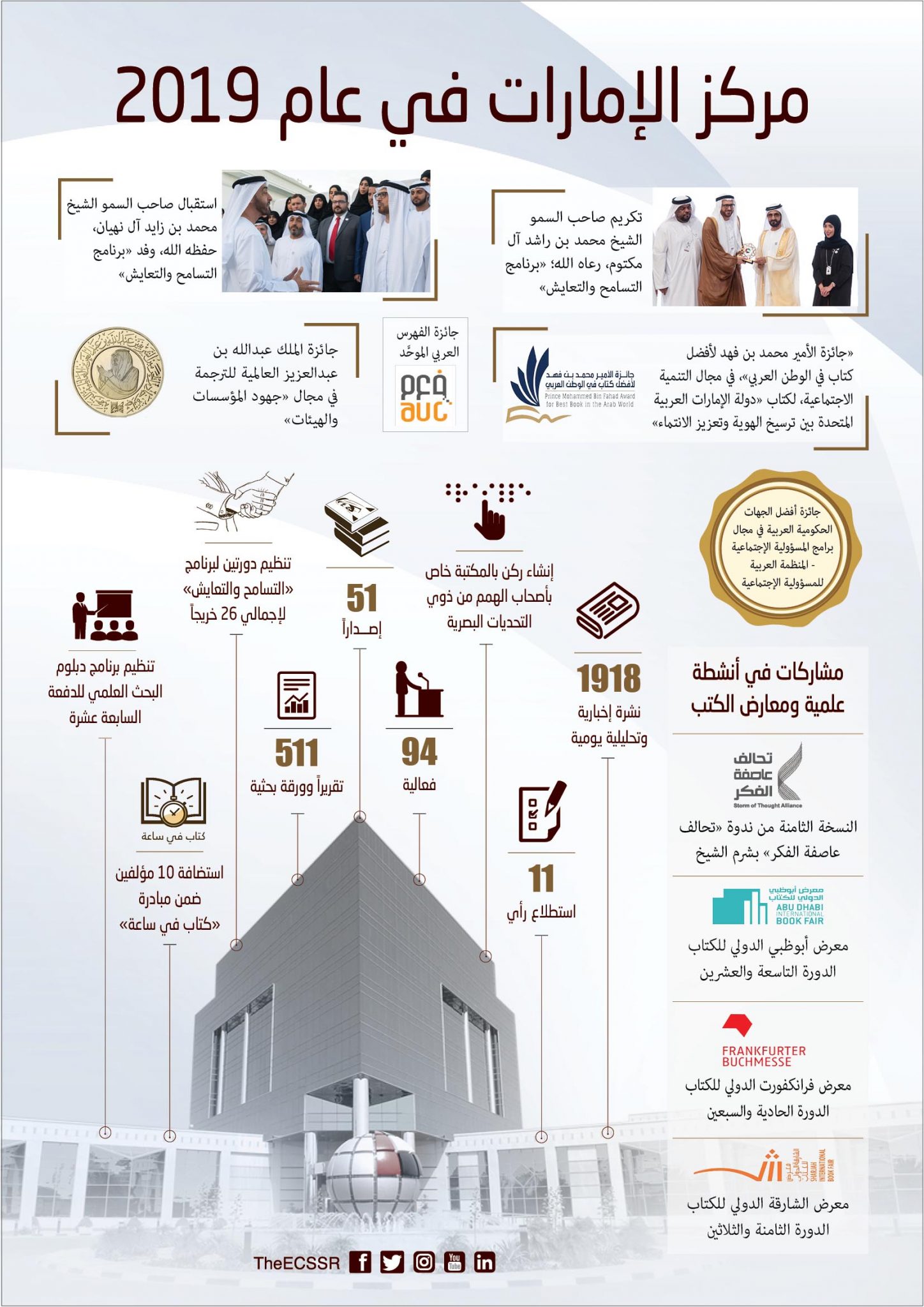 The Emirates Center for Strategic Studies and Research (ECSSR) attained significant qualitative achievements during 2019 that complement the series of great achievements it has accomplished since its establishment in 1994. These achievements are diverse, covering media, research, intellectual, and technological areas, all of which testify to the great efforts made by His Excellency Prof. Jamal Sanad Al-Suwaidi, Director General of the ECSSR. He has provided strong leadership that has enabled the Center to continue to grow as it supports the nation’s decisions makers as serves society. His Excellency was able to, thanks to his wise guidance, develop the Center into an academic and research edifice as well as an intellectual beacon not just within the UAE, but throughout the Middle East and beyond.

In recognition of the Center’s efforts in the area of tolerance and its organization of the “Tolerance and Coexistence Program,” His Highness Sheikh Mohammed bin Rashid Al Maktoum, Vice President and Prime Minister of the UAE and Ruler of Dubai (may God protect him), honored the Center during a ceremony that was held as part of the Annual Meetings of the UAE Government 2019, on Tuesday, November 26, 2019, to honor the winners of the sixth edition of the UAE Pioneers Award. Additionally, His Highness Sheikh Mohamed bin Zayed Al Nahyan, Crown Prince of Abu Dhabi and Deputy Supreme Commander of the UAE Armed Forces (may God protect him), received a delegation from the “Tolerance and Coexistence Program,” whereby His Highness commended the Center and its role in cultivating and enhancing the values of tolerance in society.

Prof. Al-Suwaidi confirmed that the Center will continue to enhance its support to UAE decision-makers and its service to society and scientific research. He added that the Center is delving into “2020, Towards the Next 50,” with an ambitious and earnest vision to contribute to the UAE’s comprehensive development process. His Excellency confirmed that the ECSSR is keen to realize the goals of the greatest national strategy of action of its kind to prepare for the next 50 years at all federal and local government levels, as well as to prepare for the celebrations of UAE’s Golden Jubilee in 2020.

The ECSSR received a number of prestigious scientific awards. The Center won the King Abdullah bin Abdulaziz International Award for Translation for Institutions 9th Session of 2018. The book UAE: Between Instilling Identity and Strengthening Belonging, published by the Center, received the Prince Mohammed Bin Fahad Award for Best Book in the Arab World in the Social Development Category. The ECSSR received the Best Arab Organization Award for Social Corporate Responsibility Programs and the 2019 Government Excellence Challenge Award, organized by the Arab Organization for Social Responsibility and the Excellence Awards Academy, in appreciation of the prominent role the ECSSR has in promoting science and culture.

The ECSSR entered into research and scientific partnerships with other regional and international research centers in order to benefit from different research experience. The First Strategic Dialogue was held between the ECSSR and the Indian Council of World Affairs, New Delhi, on 16 April 2019. The ECSSR gave remarkable attention to innovation, technology and artificial intelligence, and made many notable achievements in these fields. The ECSSR also focused on opinion polls, conducting 11 polls about several vital political, social, education, and health issues.

Stressing the importance of enriching societal and intellectual dialogue, the ECSSR organized and participated in many scientific, research, and cultural events and activities. It contributed to the events of the 8th meeting of the “Storm of Thought Alliance” held in April 2019, under the theme of “Future of Education and Scientific Research in the Arab World” as part of the Storm of Thought Alliance Initiative launched by the ECSSR in May 2015. The ECSSR organized 1050 various events throughout the last 25 years including 94 events in 2019 alone and one session and seven lectures about the “Year of Tolerance” announced by His Highness Sheikh Khalifa bin Zayed Al Nahyan, President of the United Arab Emirates, may God protect him.

The ECSSR continued its efforts in publishing books and studies. It issued 51 publications with a total number of 1231 publications from 1994 to 2019. These publications include books, strategic and international studies, and various magazines. The ECSSR published two issues of Aafaq Al-Mustaqbal, two issues of Strategic Visions and four issues of the People of Ashab Al-Hemam.

In the area of research, the ECSSR continued its efforts in carrying out reports, studies, and policy papers that touch on political, strategic, military, economic, technologic and energy issues, with a total of 511 reports and policy papers published. The Center is also conducting a human rights study on the GCC. In this regard, an ECSSR delegation undertook 36 visits to entities in the UAE, and 12 to foreign countries namely: The Kingdom of Saudi Arabia, the Kingdom of Bahrain, the State of Kuwait, the Hashemite Kingdom of Jordan, the Arab Republic of Egypt, the UK, Belgium, France, Germany, Switzerland, Russia and South Korea, all to collect information that would serve this study and its goals.

The ECSSR pursued its role in cultivating intellectual and public awareness by providing decision makers and leadership with important local, regional, and international developments by sending news messages through WhatsApp, as well as through daily news and analytic bulletins. A bulletin of special note is Akhbar Al-Sa’a, which in 2019 reached 1981 issues.

The ECSSR also continued its role in serving readers and researchers through the UAE Federation Library, which currently comprises 518,112 books, in addition to five million digital references available to all users. The ECSSR has been keen to serve people of determination, creating a special area for people with visual impairment that contains books in Braille. As a result of these distinguished efforts, the Library received two awards in 2019: The Federal Personality Award, granted by the ECSSR, and the Arabic Union Catalogue Award.

Aware of the importance of training and continuous development for Emirati cadres, the ECSSR in 2019 carried out the 17th Scientific Research Diploma Program in addition to two programs of the “Tolerance and Coexistence Training Program,” with a total of 26 graduates.