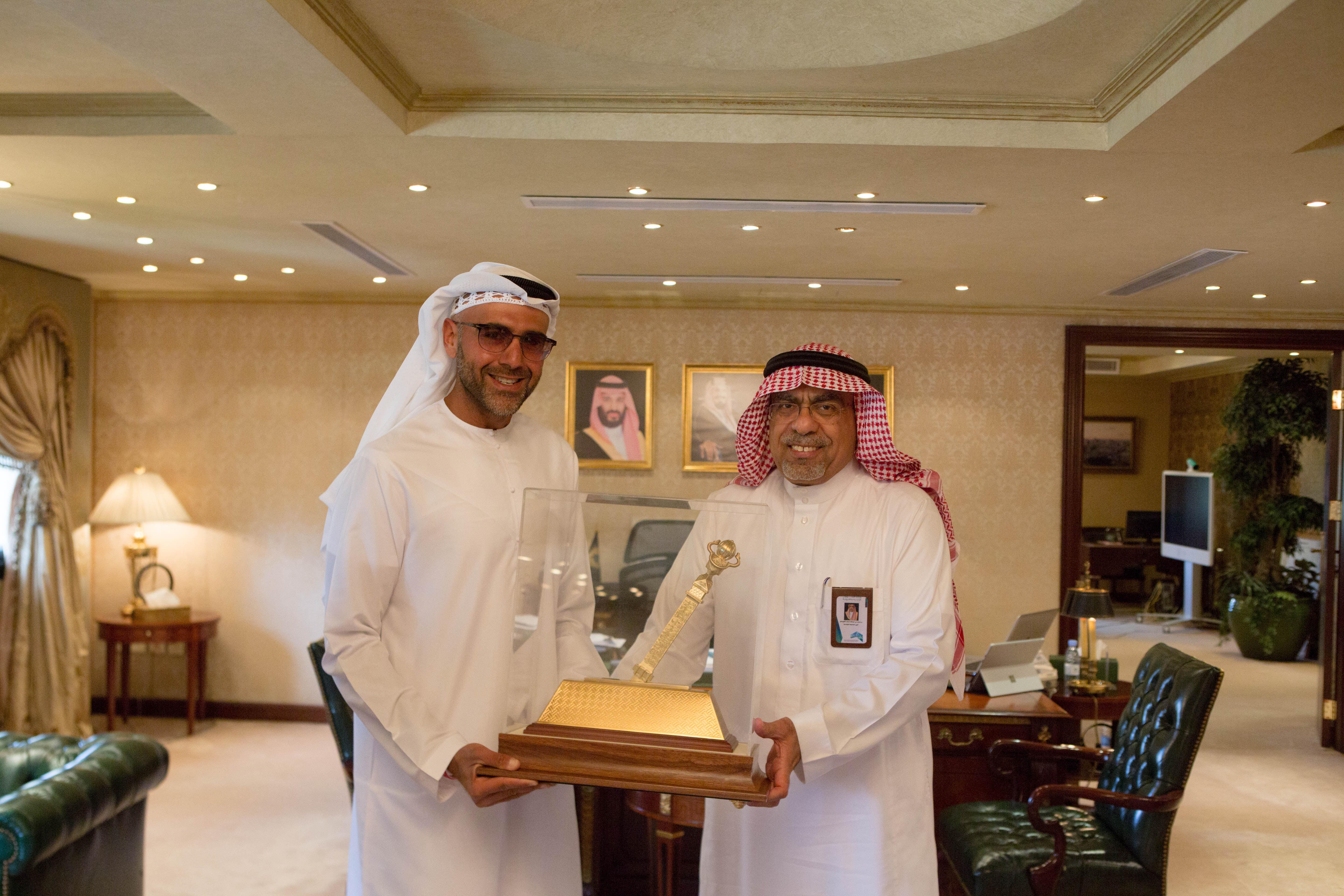 The honoring ceremony was attended by Sheikh Mohammad Abdulhamid Qattan (the owner of Almarasim Company in Makkah), Eng. Raed Samarqandi (the Manager of the Public Security and Social Services Department and the Manager of Public Relations and Media at the Holy Makkah Municipality), Dr. Talal Al-Maghrabi (the Deputy CEO of Wadi Makkah Company), Dr. Wadee Al-Barqawi (the CEO of Telal Alnamaa Company), Ms. Maria Hejazi (an advisor for the Human Building Company) and Dr. Thamer Sulaiman Abu Galia (the Chairperson of the Board of Directors of Human Building Company as well as its subsidiary companies Istul Injaz and Ensan Media).

On Monday, March 04, 2019, Dr. Khaled was received by His Excellency the Mayor of Makkah Eng. Mohammad bin Abdullah Al-Quwaihass in in his office where they discussed subjects of mutual interest, including how much young people benefit from practicing sports.

The attendees of the ceremony commended Dr. Khaled’s heroic challenge and praised his role in presenting a positive model for the youth—a model that exemplifies strong dedication, a sense of adventure, and confidence to challenge the future. For his part, Dr. Khaled expressed his appreciation for the kind gesture. He then said that the message behind the Abu Dhabi–Makkah Run is to confirm the strong relations between the Kingdom of Saudi Arabia and the United Arab Emirates, under the leaderships of the two countries.

It is worth mentioning that Dr. Khaled organized a press conference on Sunday evening, March 3, 2019, at the Four Points Sheraton Makkah Hotel in Makkah. The media event was attended by his father His Excellency Prof. Jamal Sanad Al-Suwaidi, Director General of the ECSSR; a delegation from ECSSR; and a group of journalists. During the press conference, Dr. Khaled commended the warm welcome he received from the Saudi people in each village and city he passed along his way to Makkah. He said that this support was evidence of the warm relations between the two countries. He talked about the challenges he faced during the run and he expressed his deep respect and appreciation for the sacrifices of the martyrs in Yemen and the importance of these sacrifices in providing him with the courage and strength to overcome the obstacles in the run. He described the martyrs as the true heroes. Heroes who sacrificed their lives so that others can live in peace and security. At the end of the press conference, Dr. Khaled thanked all the sponsors of his Abu Dhabi-Makkah Run.