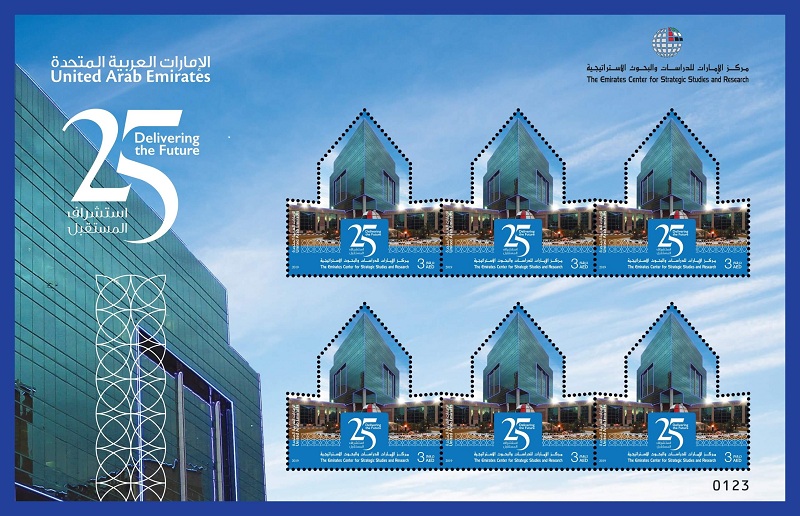 As part of the Emirates Center for Strategic Studies and Research’s (ECSSR) celebrations of its 25 year Silver Jubilee anniversary in March 2019, Emirates Post Group is issuing a special commemorative stamp. This is in recognition of the significant role the ECSSR plays in supporting decision-makers and serving the community in the UAE, and will contribute to promoting the Center locally, regionally, and globally.

The stamp features an image of the ECSSR’s building with its name in both Arabic and English, while its motto “Delivering the Future” appears in Arabic on the left-hand side and in English on the right, with the number “25” appearing in the middle, in reference to the 25 years since the Center’s establishment in March 1994. The stamp will be available on Sunday, February 10, 2019. 25,002 stamps have been printed at the Cartor Printing Press in France and will be sold for AED 3.00 each.

On this occasion, His Excellency Prof. Jamal Sanad Al-Suwaidi, Director-General of the ECSSR, expressed his profound appreciation for this gesture by Emirates Post Group, stressing that the ECSSR’s achievements since the beginning and throughout the years have been successful thanks to the direct patronage and sound guidance of His Highness Sheikh Mohamed bin Zayed Al Nahyan, Crown Prince of Abu Dhabi and Deputy Supreme Commander of the UAE Armed Forces (may God protect him). He also added that over 25 years, the ECSSR has managed to accomplish its envisioned goals; supporting decision-makers, spreading a culture of scientific research, and developing national cadres capable of shouldering responsibility and contributing to development and progress.

This stamp honors the important role played by the ECSSR for over 25 years, becoming one of the most prominent think tanks and research centers regionally and globally, consolidating itself as a leading research and academic institution. Throughout its history, and in line with the ECSSR’s management in supporting innovation as an essential approach towards its mission and vision, the ECSSR has proposed many ideas, launched several innovative initiatives, provided practical and academic recommendations to support decision-makers in addressing both internal and external challenges, and took decisions that serve to promote society and drive comprehensive development.