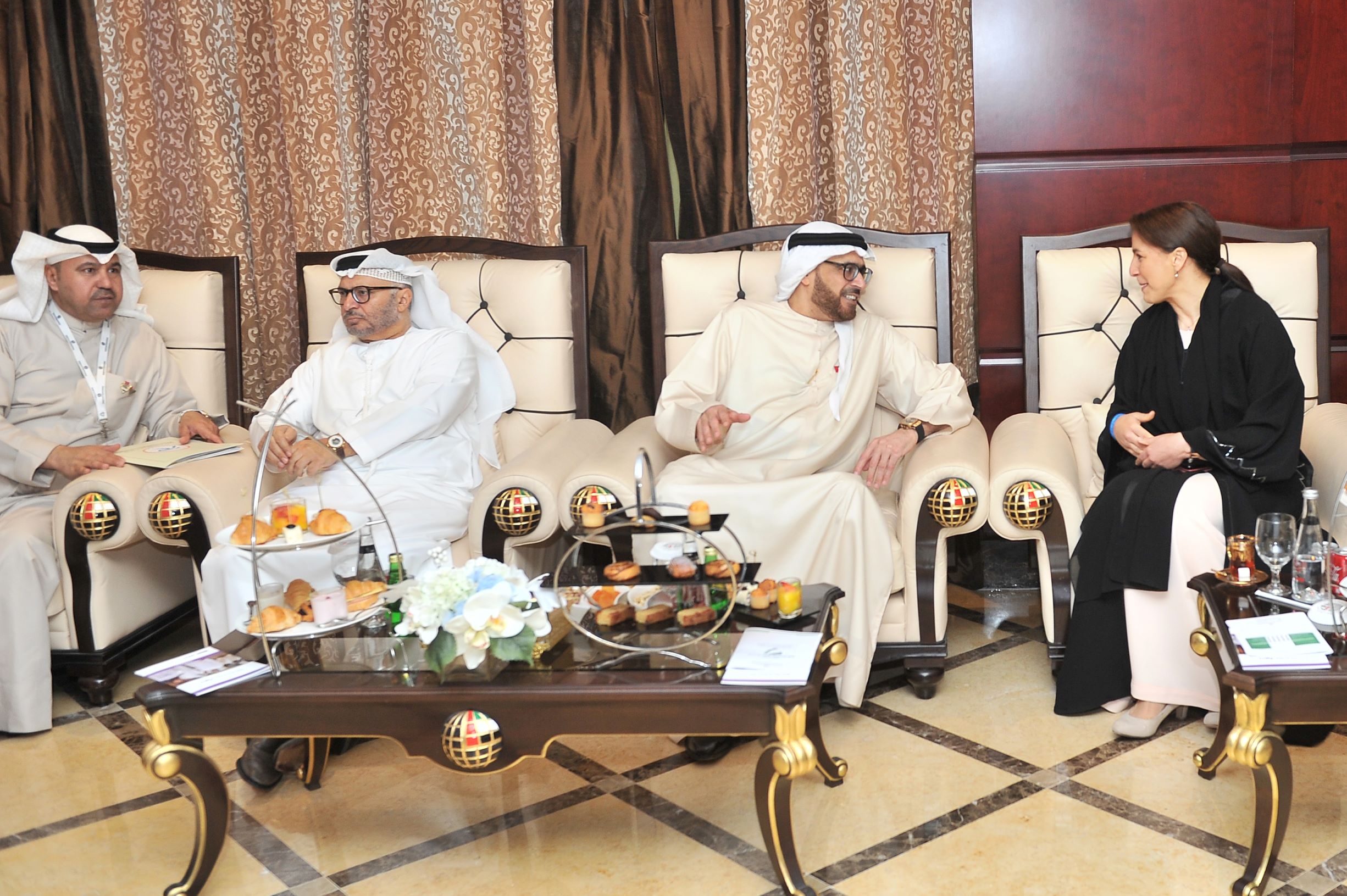 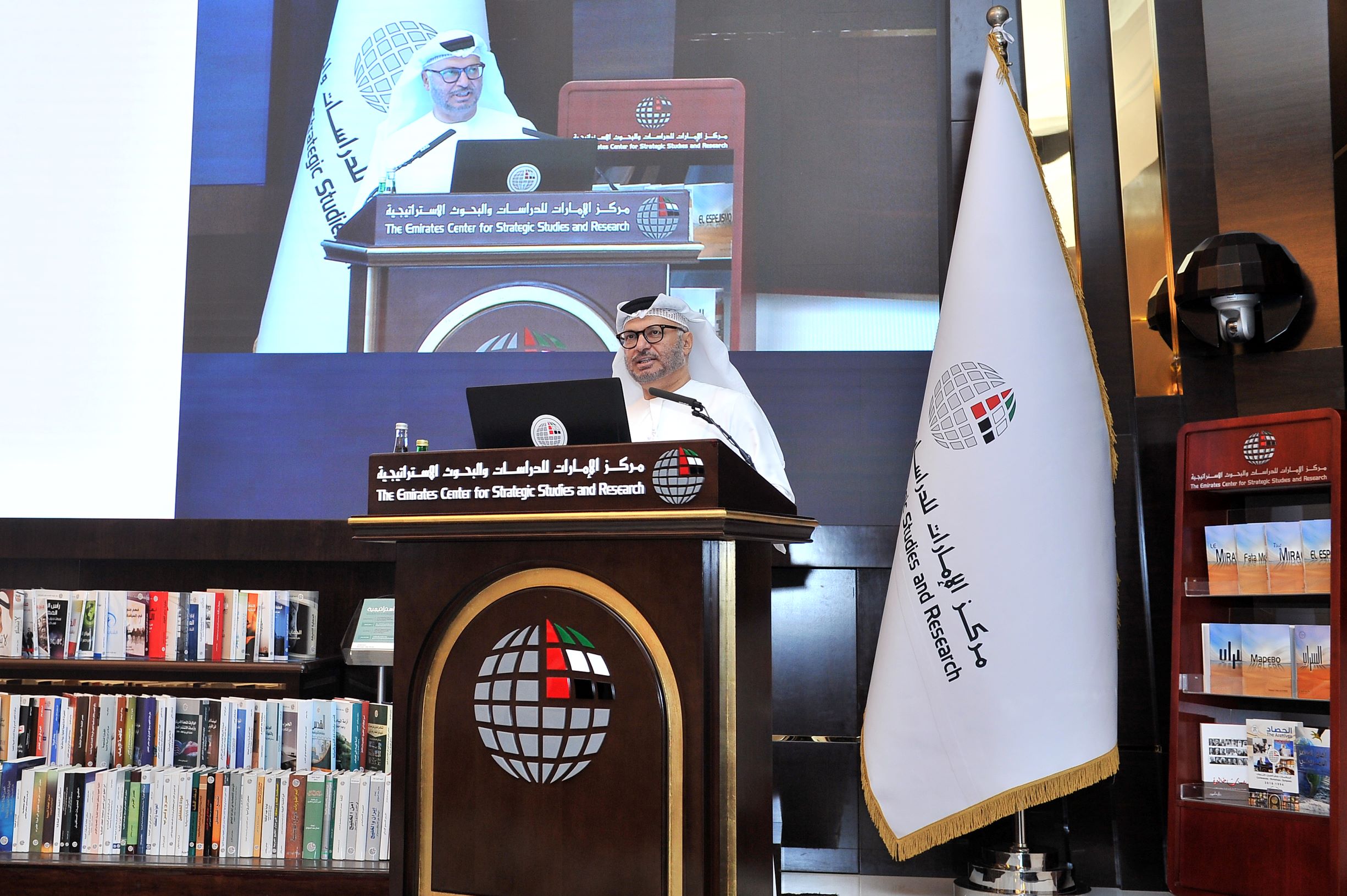 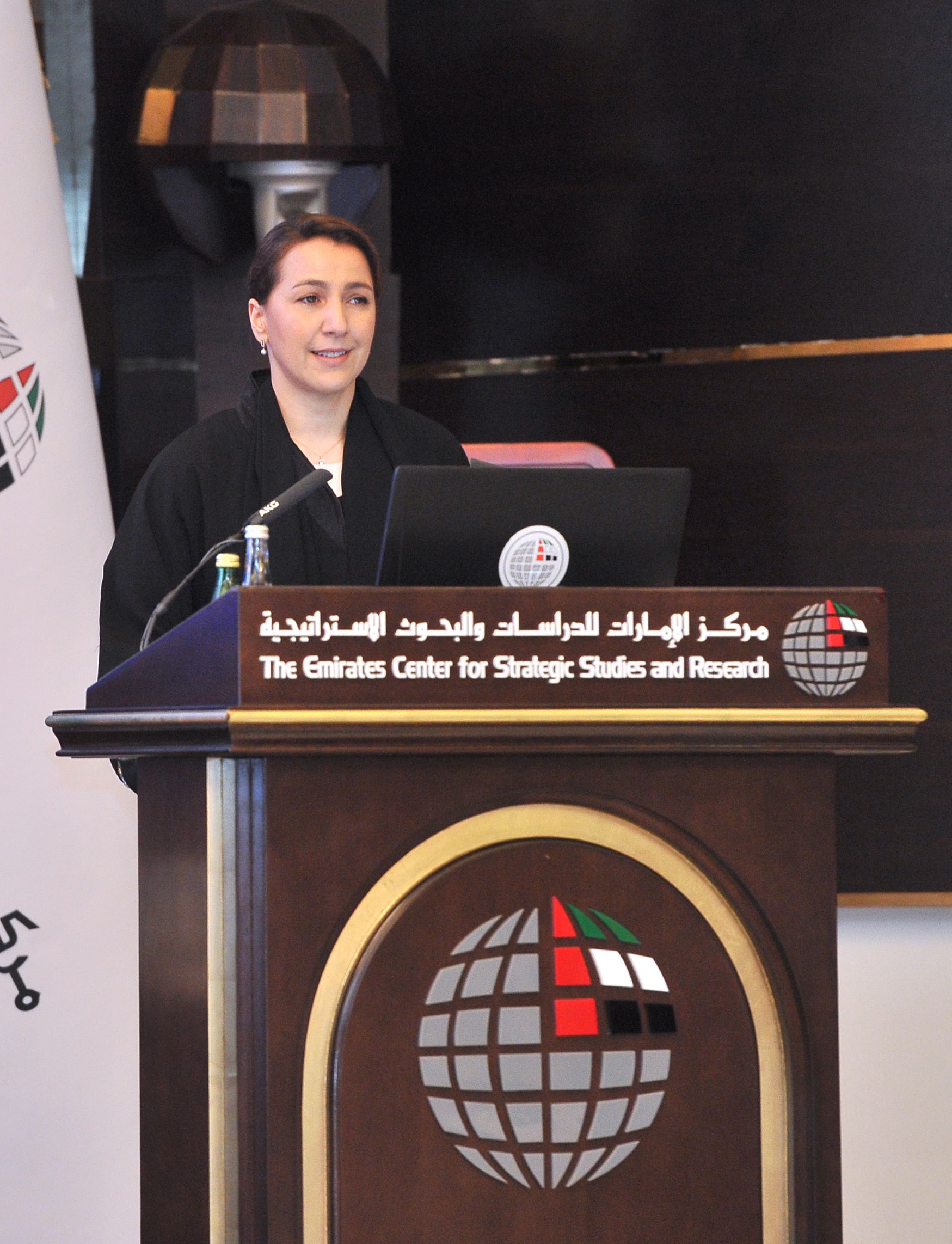 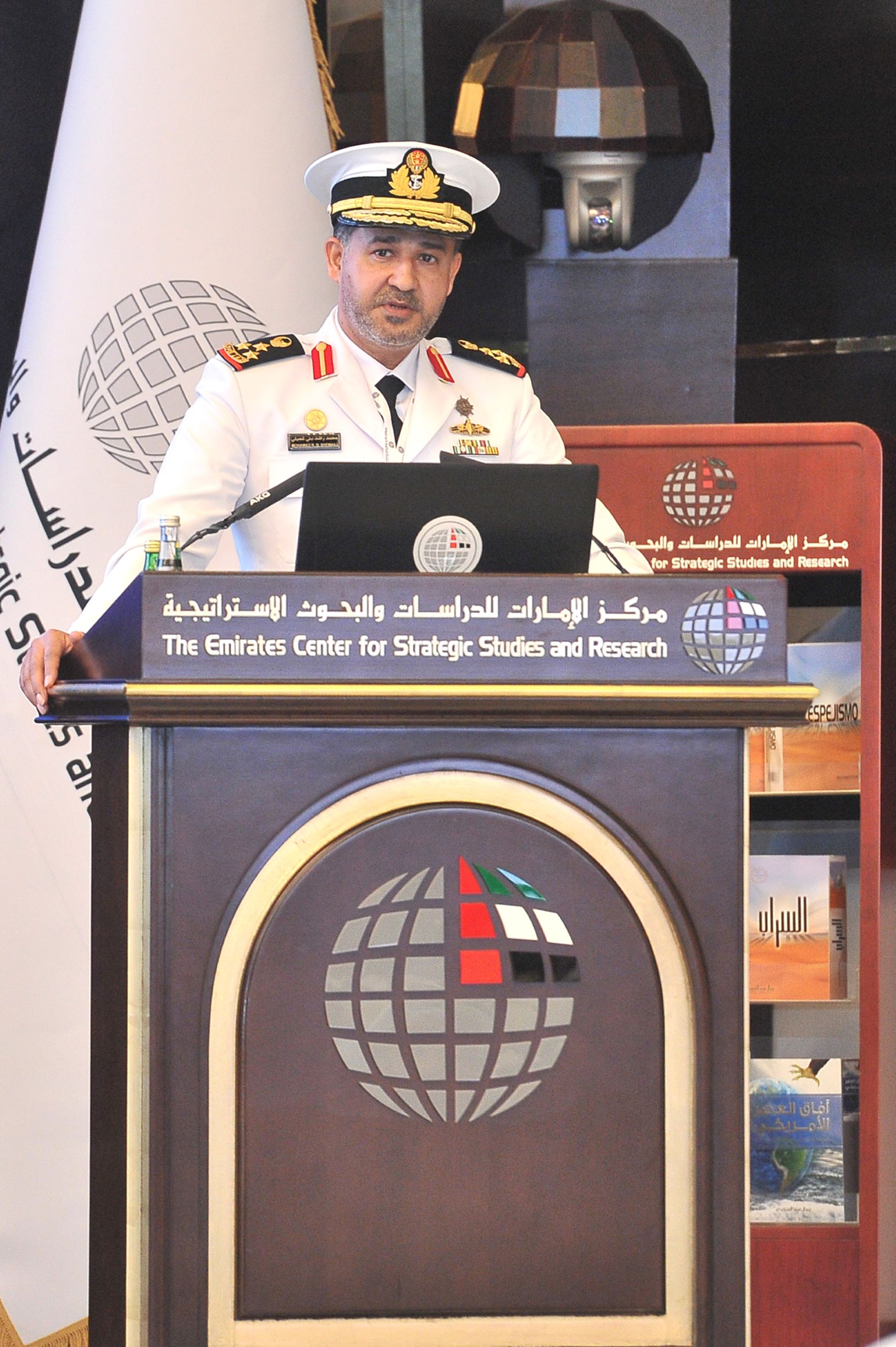 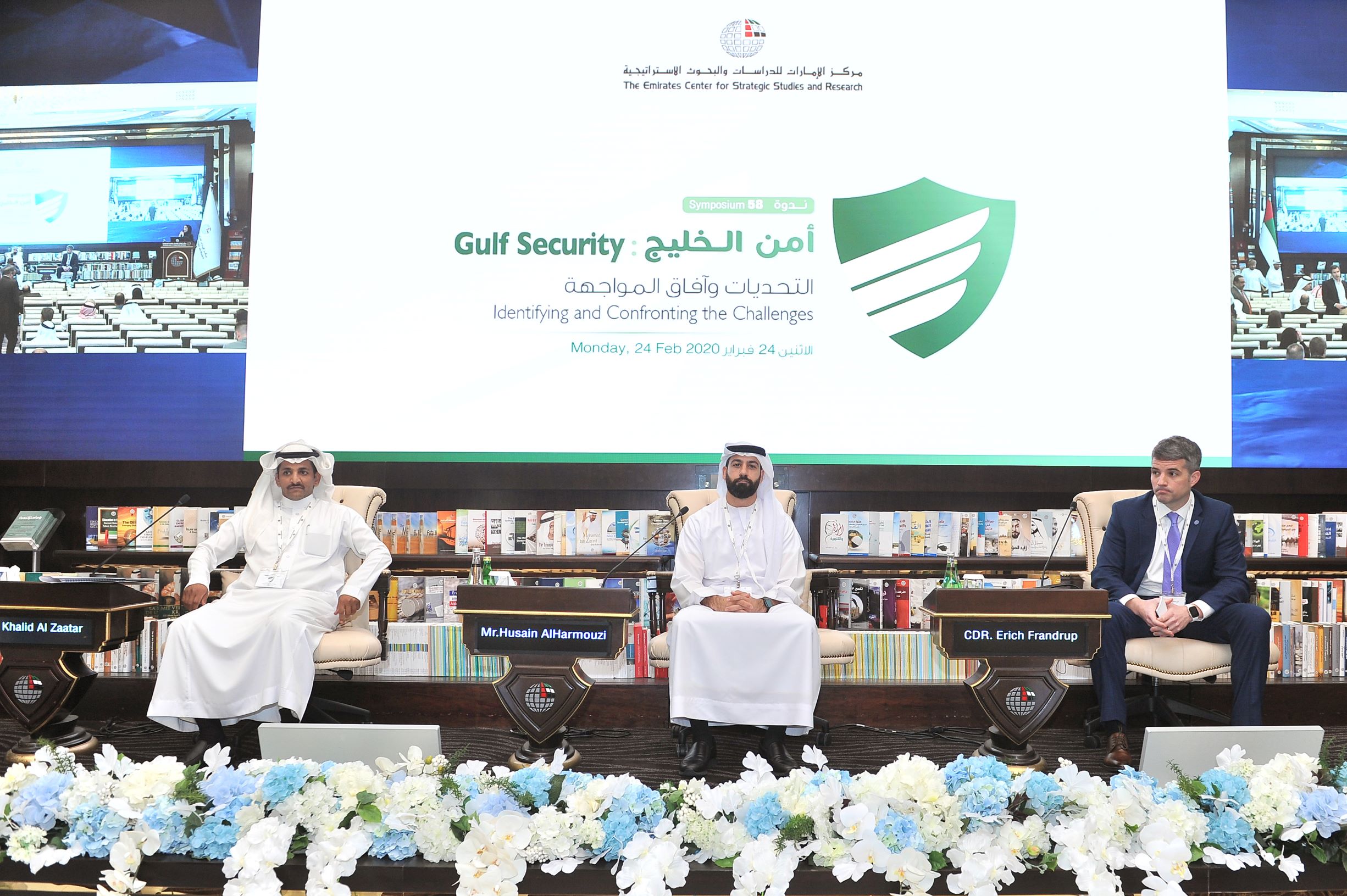 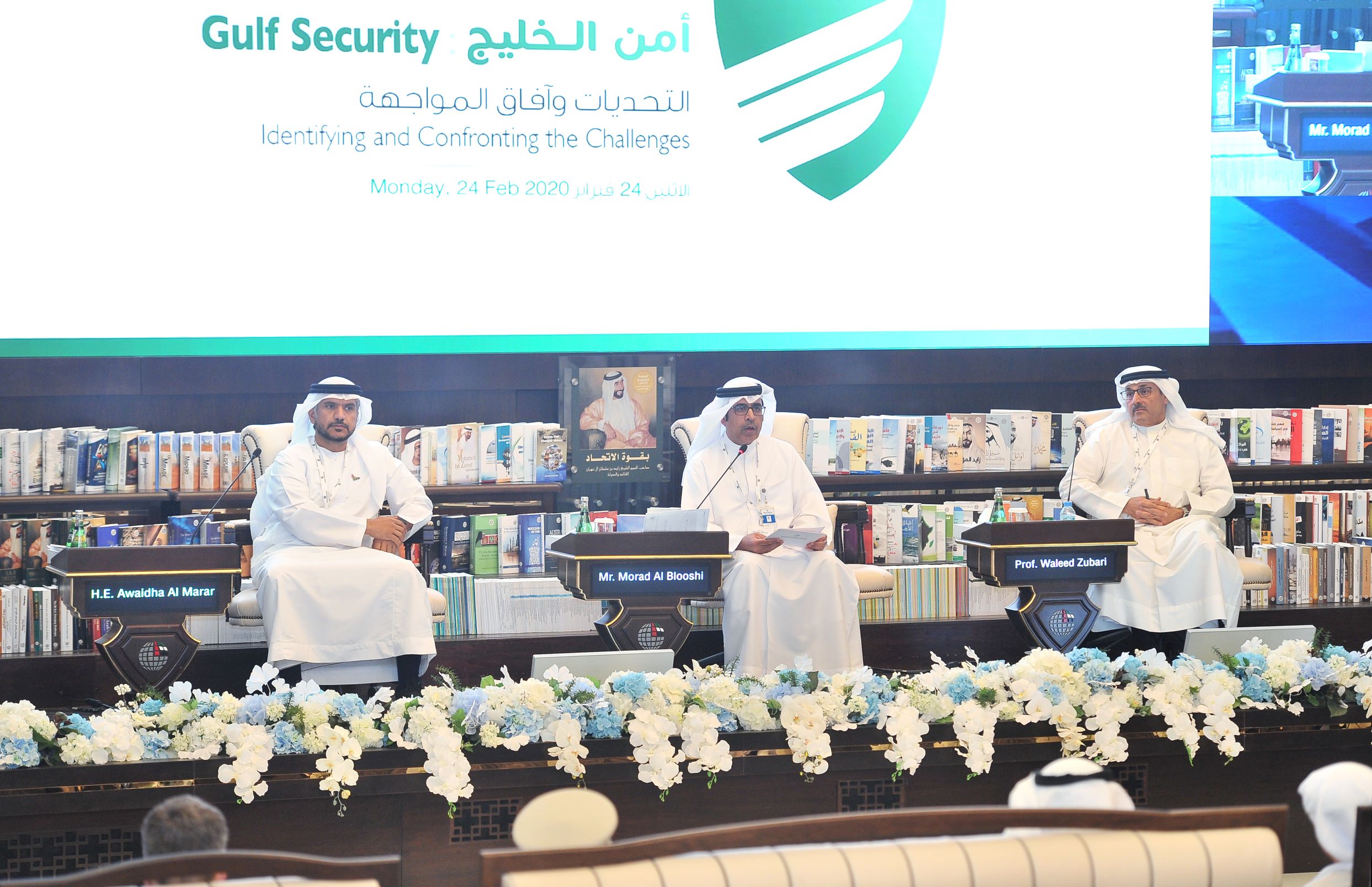 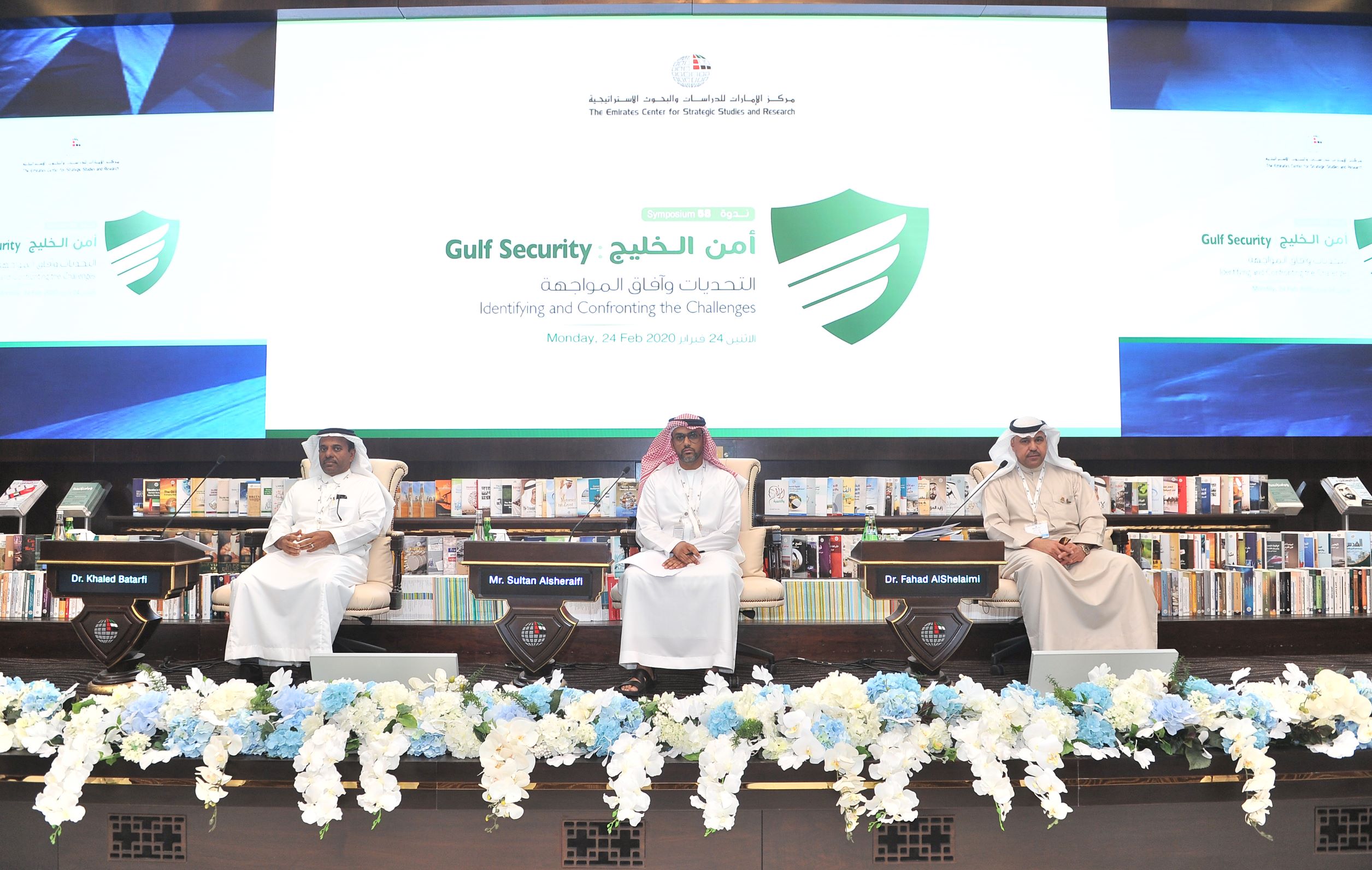 The Emirates Center for Strategic Studies and Research (ECSSR) held the symposium, ‘Gulf Security: Identifying and Confronting theChallenges’, on Monday, February 24, 2020. An elite group of officials, diplomats, intellectuals and researchers attended the event, which attracted a large audience.

The proceedings started with welcoming remarks from H.E. Prof. Jamal Sanad Al-Suwaidi, Director General of the ECSSR. He stressed the importance of the symposium’s theme, examining various challenges to the security and prosperity of Arabian Gulf countries.He pointed out that the impact of these challenges extends worldwide, due to the strategic and geopolitical importance of the region, which is pivotal for global trade and energy security.

His Excellency explained that the UAE is well aware of the importance of security in the Arab Gulf region. As a result, it strives to achieve peace and stability, aiming to maintain good relations with neighboring countries. He added that the challenges facing our region, whether in relation to security or development, are compelling and require us to find the most effective methods to address them.

His Excellency Dr. Anwar bin Mohammed Gargash, UAE Minister of State for Foreign Affairs, delivered a keynote address in which he described the current crisis with Iran as the primary concern for the international order. Its implications go beyond the region, extending to many other states, severely damaging their economies. Further, he stressed that priority should now be given to political moves to avert military conflict in the region, which would result in widespread damage to both the economy and stability, regionally and globally.

He said that the response of Arabian Gulf countries to the Iranian crisis in the last few months confirms their ability to manage any political crisis in the region rationally, without reprisals, adopting a responsible political approach.

In a keynote address, delivered on his behalf by Brigadier General Naval Staff Mohamed Rashid Al Shumaili, H.E. Major General Staff Pilot Ali Mohamed Musleh Al Ahbabi, Chairman of the Critical Infrastructure and Coastal Protection Authority, said tensions in the Arabian Gulf region are exacerbated by attacks on ships and oil installations, as well as threats to close the Strait of Hormuz, which complicate the military balance in the area.

During the first panel, Commander Erich Frandrup, US Navy Senior Fellow at the Atlantic Council in the US, delivered a presentation on Gulf maritime security and the Iranian threat. He said that Iran poses a clear threat to the security of shipping lanes in the region, in addition to its repeated threats to close the Strait of Hormuz. Commander Frandrup highlighted the need to reconsider current strategies on maritime security in the Arabian Gulf region.

Mr. Khalid Al-Zaatar, writer and political analyst from the Kingdom of Saudi Arabia, gave a presentation on Turkey’s foreign policy in the region. Describing the features of Turkey’s new approach, he explained that it works to consolidate relations within the region, particularly with neighboring countries, such as Iran and Iraq. Turkey is also endeavoring to raise its profile in the Arab and Islamic worlds. Al-Zaatar discussed the Neo-Ottomanism project, which looks back to the country’s history in the Middle East, and views the Republic of Turkey as an extension of the Ottoman Empire. He also referred to Turkey’s support of the Muslim Brotherhood, and explained that he believes Turkey stands at a crossroads: collapse and fragmentation or radical change.

During the second panel, Prof. Waleed Khalil Zubari, Professor of Water Resources Management at the Arabian Gulf University, Kingdom of Bahrain, tackled water and food security in the Arabian Gulf region. He underscored the need for developing an effective system for managing water resources in the region that takes into account threats to resources and ensures those resources are used effectively.

H.E. Eng. Awaidha Murshed Al Marar, Chairman of the Department of Energy, Abu Dhabi, addressed energy transition and its implications for Arabian Gulf states. He said there is currently a global shift from non-renewable sources of energy to a mix of energy technologies that depend mainly on renewables. He highlighted the urgent need to increase the proportion of renewable energy within the overall energy mix, referring to the security and political dimensions within this trend. This requires Arabian Gulf countries to strengthen their position through increased global cooperation on development and energy.

The third panel saw Dr. Fahad Al-Shelaimi, a political and strategic analyst, and researcher from the State of Kuwait, explore prospects for resolving the Qatar crisis. Detailing the various political, diplomatic and economic developments within the crisis, he explained that Turkey and Iran have intervened directly and indirectly. He expects the Gulf blockade against Qatar to persist until 2021, as Qatar continues to play the victim.

Dr. Khaled Mohammed Batarfi, Professor at Alfaisal University, writer and political analyst, from the Kingdom of Saudi Arabia, discussed the role of international alliances in the region; specifically, the US, Russia and China. He highlighted the significant role of these alliances in withstanding threats that undermine the security and stability of the Arabian Gulf region. He said that negative experiences with the US have encouraged countries of the region to protect their interests by relying more on developing their own potential, as they unify Arab and Islamic alliances to face political risks, volatilities and potential confrontations between regional and international powers in the Arabian Gulf.

Concluding, the symposium recommended that the Arabian Gulf region seeks consensus based on a solid understanding of issues, in order to protect the region from ongoing crises. It highlighted the importance of concerted international efforts to secure the region, as well as the need to diversify the international alliances of Arabian Gulf countries, in light of the increased risk of military conflict amid persisting tensions.

In addition, the symposium also called for mounting pressure on Qatar’s allies, and for pursuing Qatar’s violations globally. It also stressed the need to focus on Turkey’s motivations in opening up to the Middle East as part of its plan to establish conditions for Neo-Ottomanism, and warned of Turkey’s attempt to achieve its regional ambitions by utilizing the Muslim Brotherhood. Also stressed was the need to adopt a comprehensive plan to see the region provide the highest levels of protection for freedom of navigation through the Strait of Hormuz and its adjacent waters.