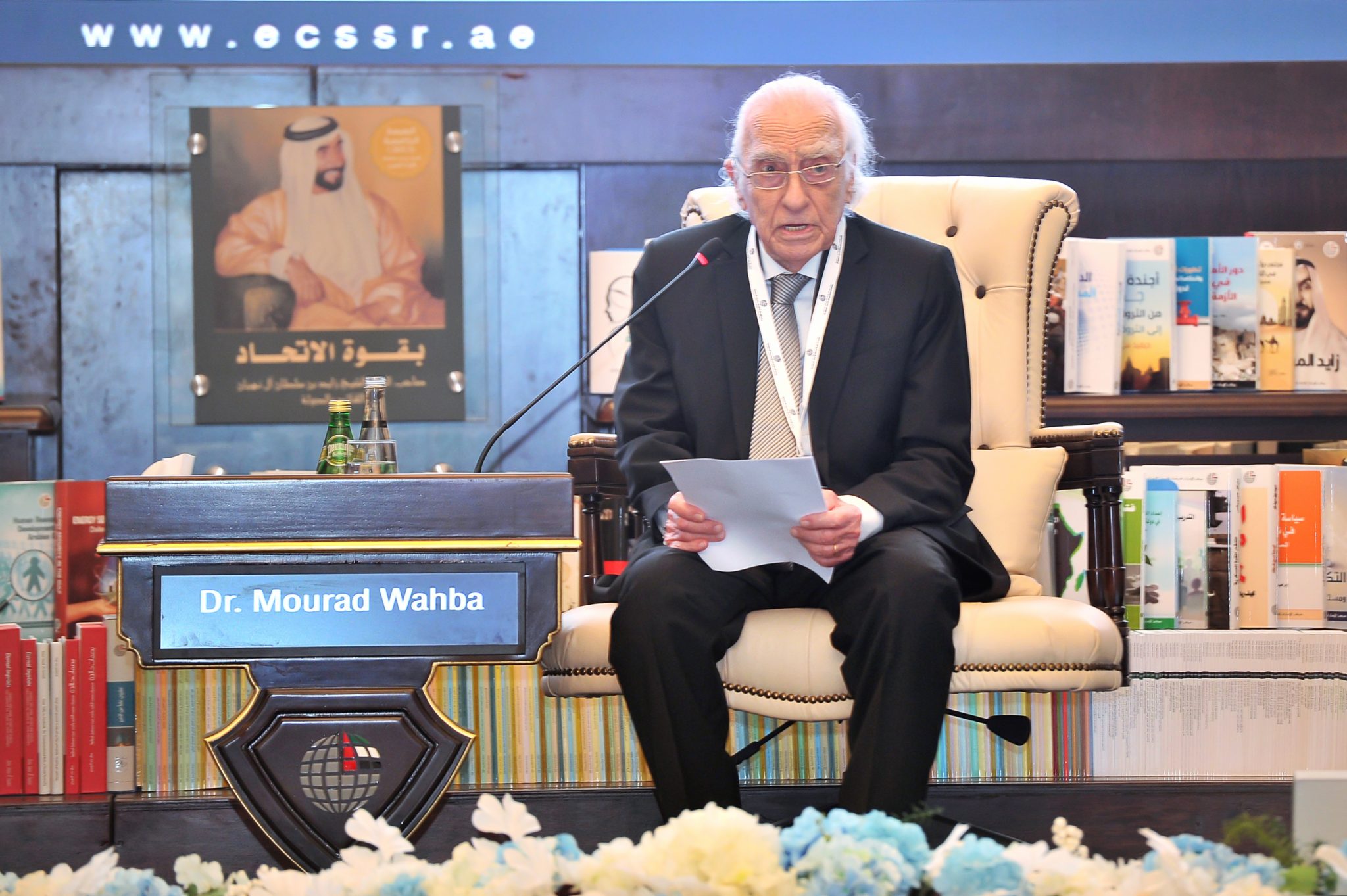 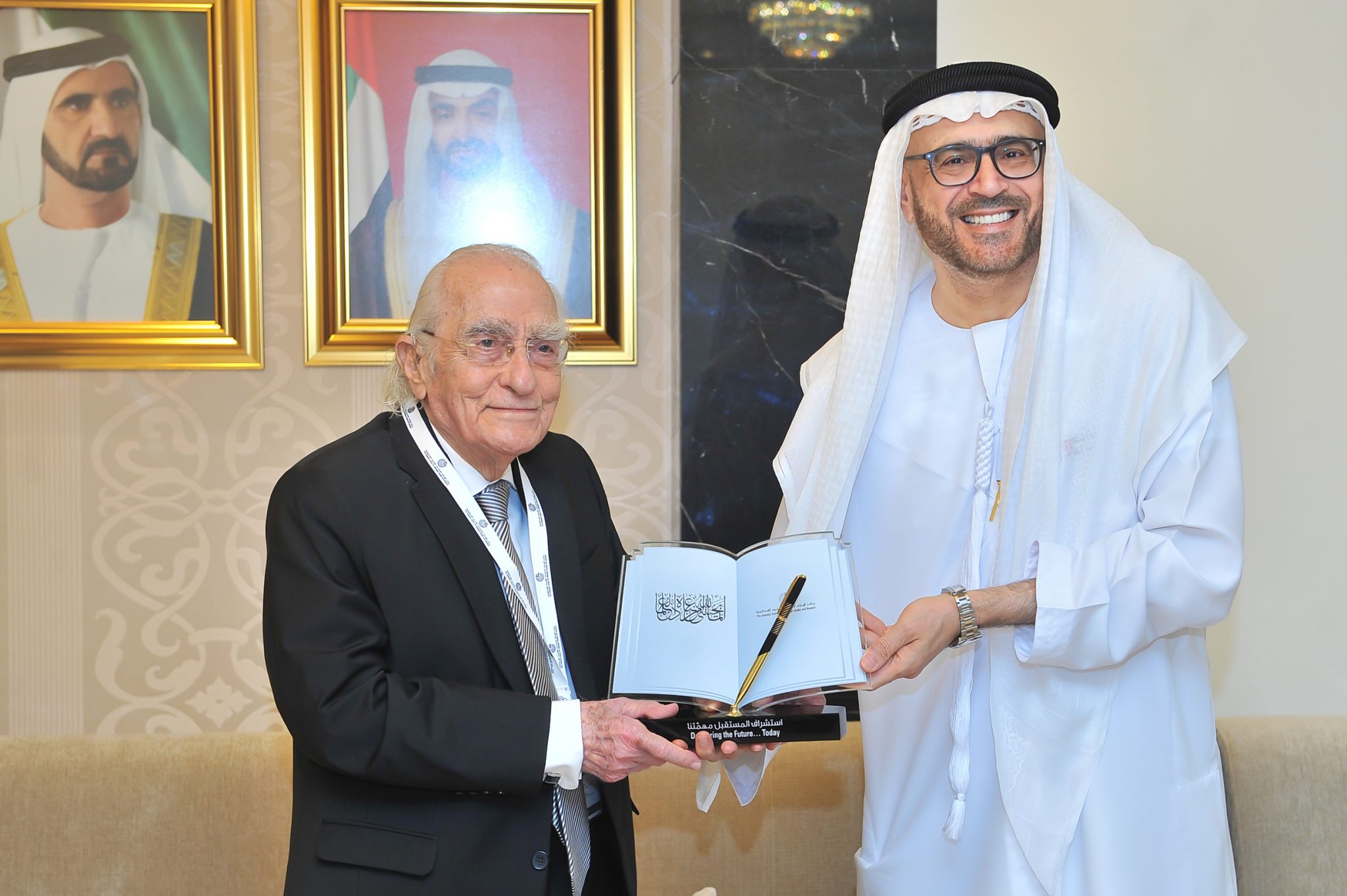 In the presence of His Excellency Prof. Jamal Sanad Al-Suwaidi, Director General of the Emirates Center for Strategic Studies and Research (ECSSR); the Japanese Ambassador to the United Arab Emirates; Mr. Ibrahim Al Abed, Advisor to the National Media Council; and, a number of writers, academics, intellectuals and media professionals, the ECSSR organized a lecture titled ‘The Fate of Political Islam’. The lecture, delivered by Dr. Murad Wahba, Professor of Philosophy at Ain Shams University, Arab Republic of Egypt, was held at 7:30pm on Wednesday, October 16, 2019, in the Sheikh Zayed Bin Sultan Al Nahyan Hall at the ECSSR complex in Abu Dhabi.

At the beginning of the lecture, Dr. Wahba thanked Prof. Al-Suwaidi for the invitation to deliver the lecture, commending the role of the ECSSR in enriching strategic and intellectual research through lectures and specialized seminars.

As the lecture got underway, Dr. Wahba defined the concept of Political Islam. He explained that in Egypt, the term Political Islam refers to four groups; the Muslim Brotherhood, which was founded in 1928 by Hassan al-Banna; the Islamic Liberation Organization, founded by Salah Sariyah; Al-Takfir wal-Hijrah; and, The Egyptian Islamic Jihad. He confirmed that the Muslim Brotherhood is the originator of these groups, and that the rest are mere branches. Dr. Wahba pointed out that Hassan al-Banna issued the basic law of the Muslim Brotherhood in 1945, with the most important aspect being full confidence in the leadership and absolute obedience to it.

Dr. Wahba pointed out that the Muslim Brotherhood and other Islamic groups in Egypt have a shared belief in the establishment of an Islamic government based on the Qur’an and Sunnah, in order to restore the Islamic Caliphate, which was eliminated by Kemal Atatürk in 1923. Therefore, critical analysis of Political Islam should be made in the context of the conflict between the Islamic state and the secular state, for example in modern Turkey.

Dr. Wahba then talked about the Muslim Brotherhood in a historical context, the roles it played, its presence in many Islamic countries and its attempts to penetrate various areas of life, particularly education. He explained that the group had great influence in education after it deceived Leftist groups with shared campaigns, such as backing the right to create political parties. However, Dr. Wahba pointed out their true goal was gain more support for the Muslim Brotherhood.

Dr. Wahba referred to the so-called Arab Spring, which the Muslim Brotherhood exploited to take power in Egypt, and he explored the developments that led to the overthrow of their rule.

At the end of his lecture, Dr. Wahba attempted to answer the central question of how to combat the Muslim Brotherhood. In order to achieve peace in the Middle East, he calls for the establishment of a secular current to confront fundamentalists in the region. He added that the decisive confrontation with Political Islam entails establishing three main currents. The first would be based on secularism, the second would revive the thought of Averroes (a Muslim Andalusian philosopher also known as Ibn Rushd), while the third current would focus on enlightenment. Dr. Wahba pointed out that secularism combats fundamentalism, while the Averroes current could be very important at this stage in helping to confront Political Islam. Finally, enlightened ideas help us think logically, and Dr. Wahba underscored that this is how we can eliminate the Muslim Brotherhood.