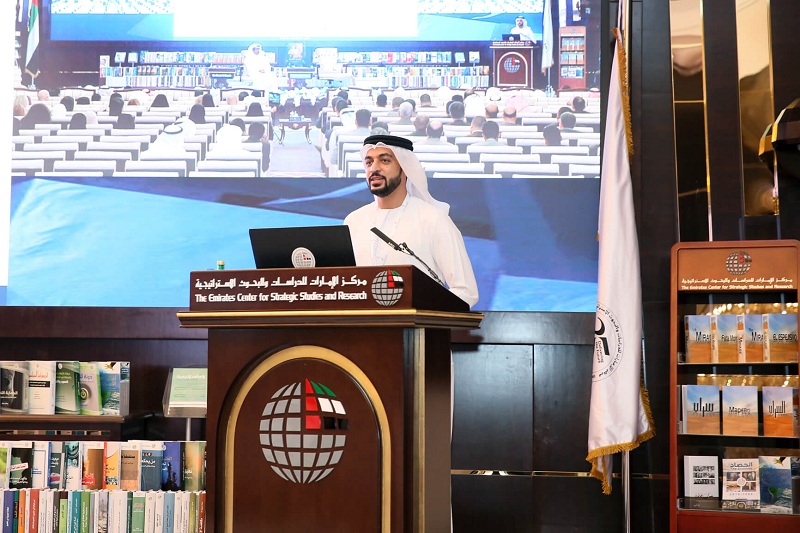 On Wednesday, February 13, 2019, the Emirates Center for Strategic Studies and Research (ECSSR) held a lecture entitled Innovation in the Government Sector delivered by Mr. Khalid Al-Mazmi, Director of Strategy and Future Department, Federal Authority for Government Human Resources. Held at Sheikh Zayed Bin Sultan Al Nahyan Hall, at the ECSSR complex in Abu Dhabi, Mr. Al-Mazmi began the lecture by thanking Prof. Jamal Sanad Al-Suwaidi, Director General of the ECSSR, for inviting him to speak, and commended the ECSSR for addressing some of society’s most important issues.

Mr. Al-Mazmi delivered his lecture against the backdrop of The National Strategy for Innovation, launched in 2014 by His Highness Sheikh Mohammed bin Rashid Al Maktoum, Vice President and Prime Minister of the UAE and Ruler of Dubai (God protect him), which aims to see the UAE ranked among the world’s most innovative countries. He stressed that the strategy underpins the innovation framework for government, which focuses on creating a supportive environment for innovation while identifying sectors able to drive it. Al-Mazmi highlighted how, in February 2018, the UAE government adopted the National Strategy for Advanced Innovation, an updated version of the National Innovation Strategy. Within the refreshed strategy, the focus shifted to achieving innovation in seven main areas–exploration, future skills, quality of health, quality of life, green energy, mobility, and technology. Mr. Al-Mazmi explained how this is in line with the UAE Vision 2021, which aims to see the country among the worlds’ most innovative countries, where innovations, research, science and technology are the cornerstones of a highly productive, competitive knowledge economy, driven by entrepreneurs in a stimulating environment.

The lecture reviewed the efforts of the Federal Authority for Human Resources in fostering a culture of innovation in government work. Mr. Al-Mazmi described how, since 2014, the Authority has worked to build a comprehensive strategy that focuses on developing regulatory frameworks to support innovation, training the Authority’s staff and on forming partnerships with relevant institutions to further the implementation of innovative human resource systems. The Authority has also worked hard to motivate and encourage innovators, using technology to support them, in order to implement fresh initiatives at the federal government level in human resources, as well as to provide a key platform in human resource innovation at the regional level.

Mr. Al-Mazmi confirmed that the Authority’s strategic objectives include developing an integrated system to manage and strengthen human capital in the federal government. The overarching aim is to foster a culture of innovation that creates a positive and stimulating working environment within the government, and to ensure its administrative services are provided in accordance with quality, efficiency and transparency standards.

In summarizing, Mr. Al-Mazmi reviewed some of the key initiatives that support a culture of innovation in the UAE, including UAE Innovation Month and the Public Sector Innovation Diploma Program. He pointed out that His Highness Sheikh Mohammed Bin Rashid Al Maktoum, Vice President and Prime Minister of the UAE and Ruler of Dubai (God protect him), has launched a Government Innovation Expert Diploma to help support the next generation of UAE nationals in leading innovation within government. The Innovation Diploma Program, which started in April 2015 with 55 participants from federal and local government authorities, offers training activities, interactive workshops and field visits. Participants are also asked to design and develop innovation projects with a particular focus on the UAE Vision 2021.