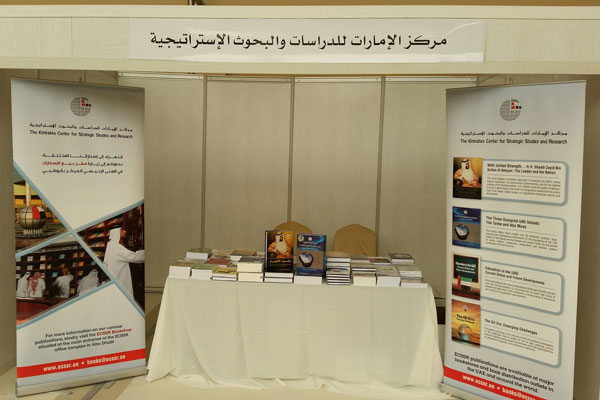 As part of its efforts to serve the community, the Emirates Center for Strategic Studies and Research (ECSSR) participated in the 2nd Al Yahar Cultural Caravan this year, held on 23-24 October in Al-Ain. The event was inaugurated by His Excellency Sheikh Nahyan bin Mubarak Al Nahyan, Minister of Culture, Youth and Community Development. The two-day event was held under the slogan ‘Our Society Our Responsibility’. It witnessed participation of 125 government and private agencies who took part in more than 130 activities.

During the event, the ECSSR showcased its latest publications, especially those released in the year 2014. The list included original and translated books by internationally-acclaimed authors, and specialists on international relations, security, military, strategic, energy, education, and environmental issues. A number of these books have been well received in domestic and international exhibitions.

Among the publications displayed was With United Strength: H.H. Shaikh Zayid Bin Sultan Al Nahyan… The Leader and the Nation and Prospects for the American Age: Sovereignty and Influence in the New World Order by His Excellency Dr. Jamal Sanad Al-Suwaidi, Director General of the ECSSR. The book has received wide recognition in local and international academic and research community. The Center also exhibited periodicals such as Aafaq Al-Mustaqbal and quarterly refereed journal Strategic Visions.

Al Yahar Convoy initiative is organized, supported and sponsored by the Ministry of Culture, Youth and Community Development and is aimed at promoting the nation’s values and social cohesion. The focus this year was on several objectives; including the dissemination and promotion of the concepts of culture, community and environmental development, raising awareness among citizens and residents through effective coordination with the partners of the Ministry in all sectors. The Ministry is keen to transform cultural caravans into cultural and intellectual hub and wants to enhance communication between various groups in the society besides discovering and harnessing talent across all fields.

The large turnout of the people of Al Yahar and its surrounding areas in the convoy was evidence of the initiative’s success in achieving its goals, which focused on fostering partnership among various ministries and public and private institutions. Community members enjoyed the various activities organized during the event, which delighted the people of Al Yahar district and its adjacent areas. It made them feel that they are the focus of officials’ attention not only in the Ministry of Culture, Youth and Community Development but also of other institutions.

The ECSSR participation in the event proves the attention that the Center and H.E. Dr. Jamal Sanad Al-Suwaidi give to national and social cohesion for which the Al Yahar convoy was organized. Since its inception, the Center has organized many activities, events and initiatives toward promoting the values of the nation, caring for the disabled, women empowerment and creating Emirati researchers to contribute to the progress of society at all levels.