ECSSR ECSSR NewsECSSR Symposium No. (55), Experts and Media Professionals: New Media is Not a Replacement for Traditional Media There Is a Need for Integration and Interaction

ECSSR Symposium No. (55), Experts and Media Professionals: New Media is Not a Replacement for Traditional Media There Is a Need for Integration and Interaction 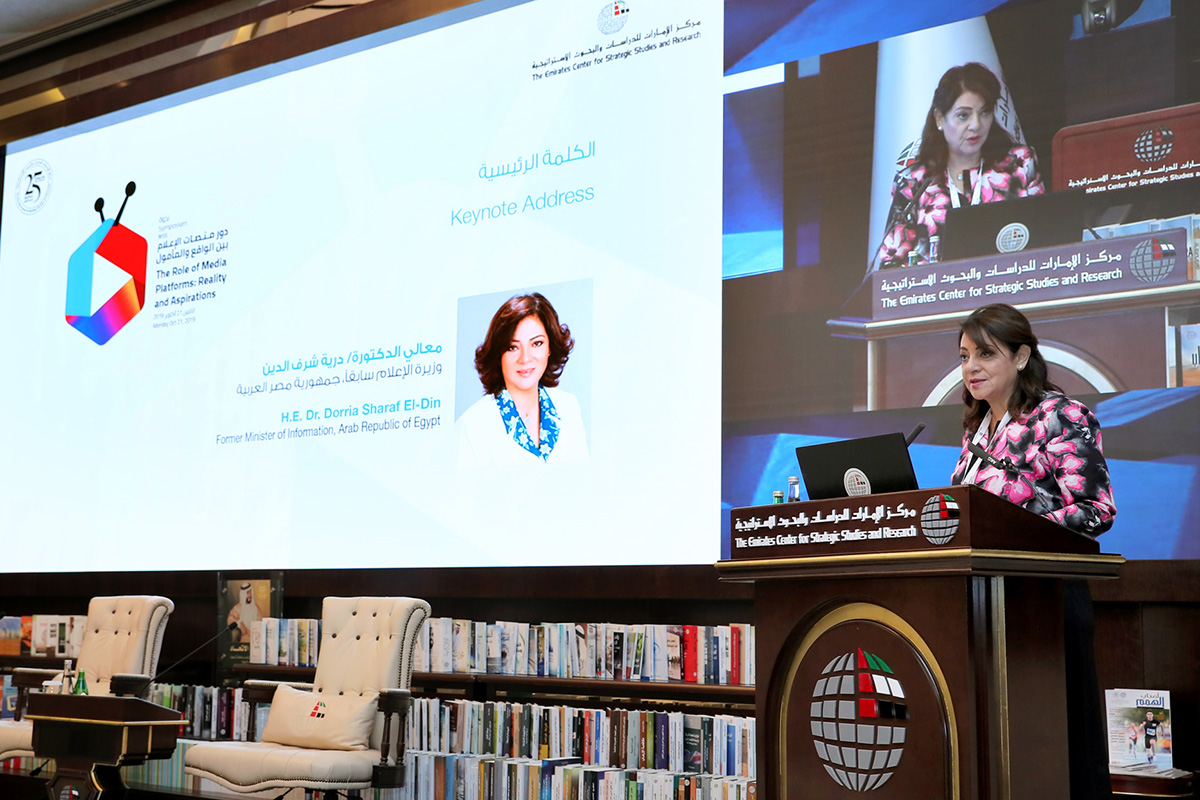 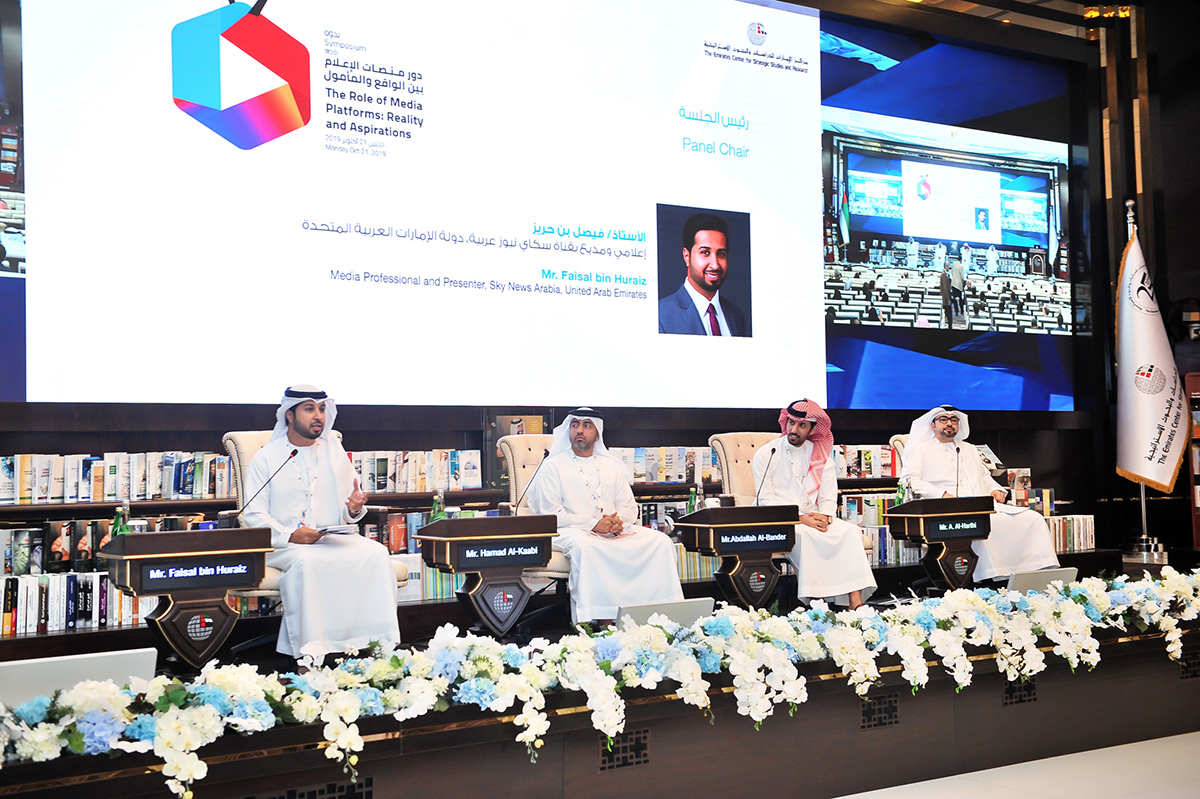 In the presence of H.E. Prof. Jamal Sanad Al-Suwaidi, Director General of the Emirates Center for Strategic Studies and Research (ECSSR), the Center held a symposium titled ‘The Role of Media Platforms: Reality and Aspirations’, on Monday, October 21, 2019. The symposium was attended by officials, media professionals and writers, as well as an elite group of intellectuals and diplomats in the UAE, in addition to a large audience interested in media affairs.

The symposium began with welcoming remarks from H.E. Prof. Al-Suwaidi, in which he explained that the symposium focuses on applicable mechanisms to support traditional media, as well as mechanisms to regulate digital content and enhance societal awareness within the space digital media has claimed in today’s world. He also pointed to the increasing need to prepare society to conscientiously deal with the challenges posed by the rapid spread of new media.

His Excellency stressed the media’s significance at this point in time, and the need to pay more attention to the latest developments in media. He referred to the great importance the wise UAE leadership attaches to the media sector, drawing attention to the words of His Highness Sheikh Mohamed bin Zayed Al Nahyan, Crown Prince of Abu Dhabi and Deputy Supreme Commander of the UAE Armed Forces (may God protect him), who said: “The media is not just a profession, but it is rather a noble message, a great responsibility, and its messages, if used properly, can be positive building blocks of progress, civilization and peace. It can also be a means of demolition.”

Dr. Dorria Sharaf El-Din, former Minister of Information, Arab Republic of Egypt, delivered the keynote address. She began by thanking H.E. Prof. Al-Suwaidi for inviting her to take part and congratulated the ECSSR on its 25th anniversary.

Dr. El-Din explained that new media platforms are now in fierce competition with traditional media, which includes press, radio and television, and that this has led many to believe new media will replace traditional media platforms. But this has not happened. When radio appeared, it did not replace press, and when television emerged, it did not substitute radio or cinema. She stressed that no new media platform can invalidate a traditional one, and history tells us that integration between old and new media is the consistent outcome. In this context, Dr. El-Din referred to the book, From Tribe to Facebook: The Transformational Role of Social Networks, by H.E. Prof. Jamal Sanad Al-Suwaidi. She said the book is of great value, as it examines historical developments to show how the means of communication have developed.

Dr. El-Din confirmed that official media entities are no longer the main source of media activity. Rather, rivals have emerged that are prepared to overcome all technological and physical obstacles to reach out to citizens anywhere in the world. These new rivals have massive financial resources and a huge amount of freedom; therefore, traditional media is no longer a serious competitor. Nevertheless, Dr. El-Din stressed that all media platforms, old and new, will continue to exist. Traditional media will never be eliminated, but it will engage in fierce competition with new media. Therefore, traditional media should continually look toward development and change, and should increase its levels of participation and freedom. Concluding, Dr. El-Din affirmed that competition, interaction and integration between old and new media are inevitable.

Following the keynote speech, a panel discussion was held and chaired by Mr. Faisal bin Huraiz, media professional and Presenter at Sky News Arabia. During the discussion, Mr. Hamad Al Kaabi, Editor-in-Chief of Al Ittihad newspaper in the UAE, presented a paper titled ‘Supporting Traditional Media as It Keeps Pace with Development’. He explained that traditional media proves every day that it is viable and sustainable, and that people are still interested in print media, despite the change in tools, perspectives, patterns and methods of approach. He believes the spread of digital media will not lead to the disappearance of print media. Mr. Al Kaabi looked at the experiences of some international newspapers, such as The New York Times, in developing their digital and print media products. He also addressed the methods adopted by print media to support their longevity, including increasing interest through engaging visuals and layout; diversified editorial style; coverage of internet and television influencers; and, online news coverage in print media. Concluding his presentation, Mr. Al Kaabi gave some recommendations and stressed the need for print and digital media to work side by side, taking into account the specific nature of each platform. He also recommended that print media focus on analysis, interpretation and specialized coverage, while digital media focus on news and live broadcasts. He pointed out that print media should focus on surveys, reporting and opinions, and give greater space to the exchange of ideas, in addition to reinventing its approach, production methods and visual appeal.

The final presentation, titled ‘Mechanisms to Regulate Digital Content and Raise Awareness in Society’, came from Mr. Abdulrahman Al Harthi, Executive Director of Abu Dhabi TV Network. He described digital media as a double-edged sword; if appropriately used, it can provide the basis for social development, however, it can also be a destructive tool, as a source of rumor and chaos. Mr. Al Harthi also explored the problems facing Arabic digital content, which is quantitatively poor compared to English content. He emphasized that this hinders the aspirations of Arab societies to become knowledge societies, and underlined the need for a comprehensive strategy to improve Arabic content. He also examined the positive aspects of digital media, which include spreading awareness and knowledge; showcasing positive models and examples; renouncing hatred and exclusion; furthering intellectual discourse based on cultural diversity that respects cultural specificities; promoting and spreading tolerance; reinforcing moderation; and, confronting extremism and terrorism. Mr. Al Harthi emphasized the importance of dialogue based on the acceptance of differences, without resorting to coercive means, which is the main principle of peaceful coexistence.