ECSSR Participates in the Al-Ain Education and Career Fair 2015

ECSSR Participates in the Al-Ain Education and Career Fair 2015 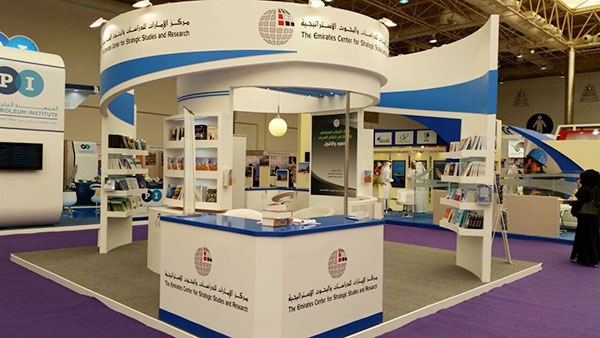 The Emirates Center for Strategic Studies and Research (ECSSR) participated in the Al-Ain Education and Career Fair, which was held from 20-22 April 2015. The event gathered numerous exhibitors representing universities, colleges, banks, national airline companies, institutes, and government oil companies as well as investment, employment and vocational training entities in line with market needs of both the public and private sectors.

The ECSSR participation in the event came at a time when it is celebrating its 20th anniversary and has crossed more than 1,100 publications. Among the most recent publications showcased at the ECSSR stand was the 5th edition of the acclaimed book The Mirage by His Excellency Dr. Jamal Sanad Al-Suwaidi, Director General of the ECSSR. The book has been highly appreciated by political leaders, academics and researchers in the Arab region and internationally. The book’s main theme centers round the idea of political mirage, or the illusion being created by political-religious groups in the Arab and Islamic worlds.

Also featuring in the stand was the book Islamic Political Movements and Authority in the Arab World: The Rise and Fall (2014), which has been edited by H.E. Dr. Jamal Sanad Al-Suwaidi and Dr. Ahmad Al-Safty. The book evaluates the experiences of Islamist movements in the exercise of power and governance, particularly following the ‘Arab spring’. The Future of Warfare in the 21st Century (2014) – which deals with the changing nature of warfare, new threats to national security and political and civil dimensions affecting future wars – was also displayed alongside the encyclopedic book Prospects for the American Age: Sovereignty and Influence in the New World Order (2014) by H.E. Dr. Jamal Sanad Al-Suwaidi.

Prospects for the American Age presents an analytical and objective vision of the current world order and the structure of power distribution within it based on the substantive idea that the United States of America will remain the dominant global power in the new world order over the next 50 years. This claim is supported by data and information, which prove qualitative supremacy of the United States.

Also on display at the ECSSR stand was the Arabic translation of Start with Why: How Great Leaders Inspire Everyone to Take Action, which has received wide acclaim since its release in English. The book offers a clear view of the requirements for leadership, inspiration and publications pertaining to development and investment in human resources, the strategy of empowerment and labor market and other publications that include refereed scholarly series in English and Arabic on various political, military, economic, social and information strategic issues of interest to the UAE and the GCC countries. The book addresses issues pertaining to the Arab world and regional and global developments in general.

The ECSSR provided visitors of its stand with the opportunity to get acquainted with the strategic research produced by distinguished experts and academics during the Center’s annual conferences on education and energy. This includes the Unconventional Fossil Fuels: The Next Hydrocarbon Revolution?, which combines working papers submitted by a group of distinguished experts and academics from the petroleum and energy sectors at the ECSSR 19th Annual Energy Conference, held from 29-30 October 2013. Similar publications are sourced from conferences organized by the ECSSR on political and economic affairs.