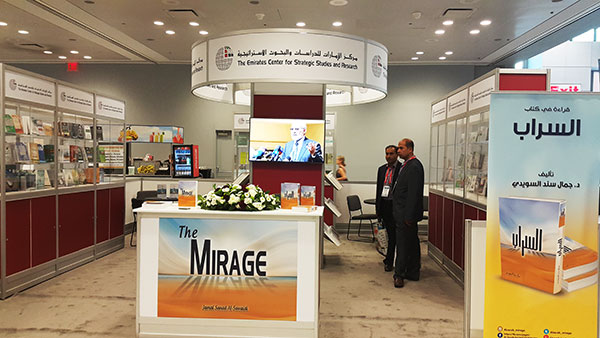 The Emirates Center for Strategic Studies and Research (ECSSR) participated in the BookExpo America 2015, which was held in New York from May 27-29. The Center also took part in BookCon, held from May 30-31. BookCon is an event where readers interact with writers, publishers and creators and book-signing ceremonies are held for authors to sign copies of their new publications.

The participation in BookExpo America 2015 this year coincided with the ECSSR’s publications crossing 1,100, which include scientific refereed series and Arabic and English titles. The publications analyze the various strategic, political, economic, social and IT issues relevant to the UAE and Gulf Arab countries in particular and issues relevant to the Arab world and regional and global developments in general.

The ECSSR’s participation in BookExpo America goes alongside its presence in international book fairs and demonstrates its interest in marking its presence at cultural events and displaying its latest publications. This is also consistent with its policy of openness toward different cultures and its objective of benefiting from the latest scientific and academic publications released by different international publishers.

Among the latest ECSSR publications showcased at BookExpo America 2015 were the first English edition of The Mirage and its fifth Arabic edition. Written by His Excellency Dr. Jamal Sanad Al-Suwaidi, Director General of the ECSSR, The Mirage has attracted the attention and interest of researchers and academics and has been praised in the Arab and international cultural circles since the release of its first edition earlier this year. The availability of its English edition in BookExpo America and other international fairs gave opportunity to people from these countries to learn about the reality of political religious groups and how they misuse religion for their vested interests and quest for power.

Another book on display at the Book Fair was The Group That Calls Itself a State: Understanding the Evolution and Challenges of the Islamic State, which was released in 2015. This book draws a comprehensive picture of the ISIL and the challenges it poses. It looks into the organizational roots of the group and its historical background, the reasons behind its rise, its sphere of activities and its strengths and weaknesses.

Also on display was Islamic Political Movements and Authority in the Arab World: the Rise and Fall; published in 2014 and edited by His Excellency Dr. Jamal Sanad Al-Suwaidi and Dr. Ahmed Rashad El-Safty. This book analyzes and evaluates the experiences of Islamist movements and parties in exercising authority, particularly following the so-called Arab Spring.

The Future of Warfare in the 21st Century, which was published in 2014, was also among the publications displayed at the fair. The book deals with the changing nature of wars, emerging national security threats and political and civil dimensions of the future of warfare. There was also the encyclopedic book, Prospects for the American Age: Sovereignty and Influence in the New World Order, which was written by His Excellency Dr. Jamal Sanad Al-Suwaidi, and provides an analytical and objective view of the reality of the current world order and the structure of power distribution.

Among the other books displayed by ECSSR at the Book Fair was the translated work, The Ottomans: the Dismantling of Images, published in 2104; and Political Demography: How Population Changes Are Reshaping International Security and National Politics, which was published in 2014. This book highlights the importance of demographic factors in reshaping the political process. There is also the translated book, Start with Why: How Great Leaders Inspire Everyone to Take Action, which was published in 2013. The English edition of this book has been widely acknowledged.