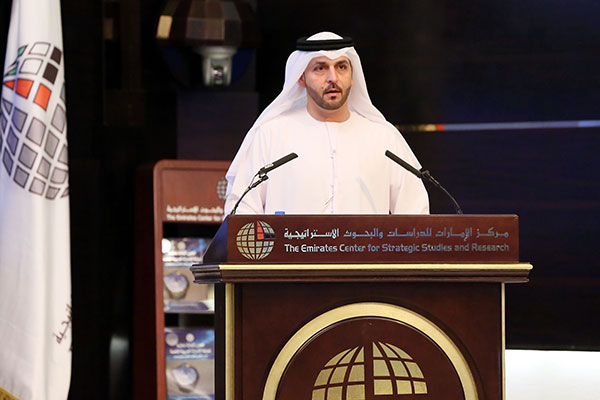 As part of its efforts to extend the hand of cooperation to all UAE agencies and institutions, the Emirates Center for Strategic Studies and Research (ECSSR) hosted a press conference to announce details of the Ataya April 2015 exhibition. Ataya is a charity exhibition organized by the UAE Red Crescent Authority (RCA), under the auspices of Her Highness Sheikha Shamsa Al Nahyan, the wife of His Highness Sheikh Hamdan bin Zayed Al Nahyan, the Ruler’s Representative in the Western Region and President of the UAE Red Crescent Authority. Her Highness Sheikha Shamsa holds the position of Vice President of RCA for Women Affairs and the Head of Ataya Supreme Committee.

In her speech – delivered on her behalf by His Excellency Dr. Mohamed Ateeq Al-Falahi, Secretary General of the UAE RCA – Her Highness Sheikha Shamsa expressed her gratitude to those sponsoring Ataya in its fourth year and to other institutions participating in its activities besides media organizations covering the event. She highlighted that Ataya initiative seeks to build constructive partnerships between individuals, institutions and companies to boost public response toward serving the causes of humanity in general. It works to improve the standards of living and to realize the dreams of every human being to live with dignity.

Her Highness Sheikha Shamsa’s speech underlined that Ataya exhibition seeks to achieve continuity and sustainability for charity and humanitarian initiatives. This trend has been evident during the last three exhibitions, which succeeded in mobilizing support, and providing care for significant groups of people including patients suffering from cancer, autism and people burdened with debt. This year, Ataya’s financial yields will be allocated to build a maternity and children’s hospital in Irbil in the Kurdistan region of Iraq.

Her Highness Sheikha Shamsa emphasized that Ataya exhibition has a far-reaching ambition to enlarge the umbrella of the program to benefit more people in and outside the UAE. She expressed hope that the exhibition will achieve its objectives this year as it has done in the past owing to response from all sections of the society. This can be achieved with the support of its benefactors and generous donors and by buying more and more products offered by the 97 exhibitors from the UAE and abroad.

The UAE RCA appreciates the concept of Ataya exhibition and other organizations specialized in social and charitable services in the UAE and abroad. It reviews the activities of benefactors and companies, selects one of them every year and tries to promote its products throughout the exhibition. This process helps introduce the chosen organization to the society and media so that they understand the services offered by them and the groups of people targeted by their activities.

Ataya exhibition showcases a wide variety of fashion products, jewelries and accessories designed by a group of Arab artists, innovators, professionals and prominent designers. The revenues earned from shop rent, ticket sale and donations are directed to a charity in or outside the UAE. Among the most important objectives of Ataya have been promoting charity institutions and projects, creating new ways to introduce them to the society, and enhancing the spirit of cooperation, compassion, solidarity, family values and engagement between members of the society. Ataya also supports local charity programs and collects donations to help their projects.

The ECSSR hosting, at its premises in Abu Dhabi, the press conference for Ataya 2015 is part of the efforts being made by the Center to serve the interests of the UAE society, by organizing and hosting events. It is also part of the continuous cooperation between ECSSR and government agencies with the purpose of serving the UAE society and decision makers.