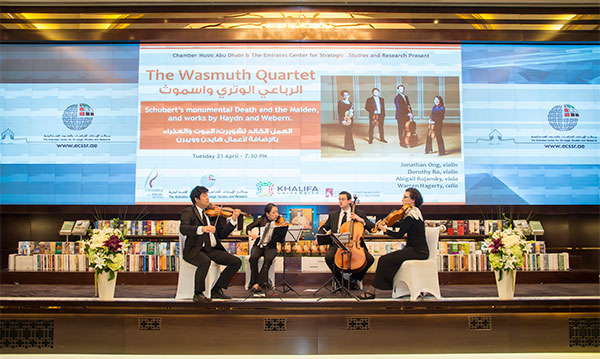 The Emirate Center for Strategic Studies and Research (ECSSR) hosted on Tuesday, April 21, 2015 a concert of Arab poetry recited to classical music. The event was organized by Khalifa University and the Abu Dhabi chamber of music.

In hosting this artistic event, the ECSSR shows awareness of the importance of reinforcing communication ties with scientific, intellectual and cultural players in the UAE. It proves willingness to support these players so that the deliver their mission of enriching the cultural and intellectual scene in the UAE. The ECSSR support also sends a strong message regarding the key role of art in the Emirati society.

The concert was attended by Dr. Tod Laursen, President of Khalifa University and his deputy Dr Aref Sultan Al Hamadi along with a number of the members of the Abu Dhabi chamber of music, Khalifa University students as well as intellectuals, classical music lovers and poets.

On this occasion, Dr. Laursen gave an address in which he thanked H.E. Dr. Jamal Sanad Al-Suwaidi, Director General of the ECSSR, for hosting this ceremony, lauding the logistical support provided by the Center to ensure the success of the concert. He also commended the work undertaken by the Center to promote the intellect, sciences and culture in the UAE.

The concert started with a performance of the quartet musical group composed of students of the US Indiana University, which played a set of classical masterpieces accompanied by the recitation of poetry by a female student from Khalifa University, to the delight of the audience who lauded the performance and thanked the Center for hosting such a spectacular event.