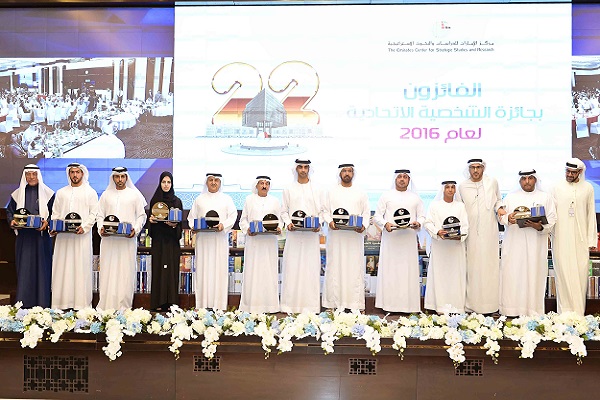 On Monday, March 21, 2016, the Emirates Center for Strategic Studies and Research (ECSSR) commemorated the Center’s 22nd anniversary following its establishment in March 1994. The celebrations were held at the ECSSR in Abu Dhabi in the Sheikh Zayed bin Sultan Al Nahyan Hall in a ceremony that was attended by prominent figures, participants and media professionals, alongside management and employees of the Center.

Commencing the activities of the ceremony with the UAE national anthem, H.E. Dr. Jamal Sanad Al-Suwaidi, Director General of the ECSSR delivered a speech in which he welcomed the attendees and expressed his gratitude and appreciation to the wise leadership of the UAE. Specifically, he thanked H.H. Sheikh Khalifa bin Zayed Al Nahyan, President of the UAE and Supreme Commander of the UAE Armed Forces (may God protect him), and H.H. Sheikh Mohammed bin Rashid Al Maktoum, UAE Vice President, Prime Minister and Ruler of Dubai (may God protect him). His Excellency Dr. Al-Suwaidi recognized the wise leadership’s continuous endorsement of research, innovation, and scientific development, and their constant efforts to adopt the latest in global research, education, and human development.

Additionally, H.E. Dr. Al-Suwaidi expressed his sincerest gratitude and appreciation to H.H. Sheikh Mohammed bin Zayed Al Nahyan, Crown Prince of Abu Dhabi, Deputy Supreme Commander of the UAE Armed Forces and President of the ECSSR (may God protect him), for his enduring support since the Center’s inception in 1994. He also credited the patronage of H.E. the Crown Prince for enabling the Center to continue its path of excellent performance; thereby rendering the ECSSR as an exemplary scholarly institution on local, regional and international levels.

H.E. Dr. Jamal Sanad Al-Suwaidi added that, “The wise leadership of the UAE have placed significant importance on the sciences and scientific research. In line with their faith and appreciation for such endeavors, the ECSSR was established in a bid to harness the sciences in a way that develops the nation in every field. As laid forth by the late Sheikh Zayed bin Sultan Al Nahyan (may God bless his soul), the march of the nation towards progression, development and modernity is based on the foundation of accurate, scientific research, as exemplified by the research and development centers that serve to propose innovative solutions to the challenges that arise within every field.”

Following the speech, winners of the third Durrat Watan research competition were announced and the winners of the Federal Personality Award were honored. The third Durrat Watan competition pertains to the accomplished achievements of H.H. President Sheikh Khalifa bin Zayed Al Nahyan (may God protect him) in the fields of politics, economics, development, education, health, military and humanitarian work. The competition focuses on His Highness’ leadership skills and mechanisms in catapulting the UAE to the top ranks in various world development, thus emerging as an exemplary for all countries seeking to sustain and benefit from the UAE in building a comprehensive and sustainable development.

At the end of the ceremony, H.E. Dr. Jamal Sanad Al-Suwaidi, Director General of the ECSSR, concluded, “Following the Center’s belief, we promise our wise leadership to progress on the path of excellence, development, innovation and creativity as a united front. We continuously endeavor to exert our utmost efforts to maintain the developmental vision aimed at building a strong sustainable economy in the post-oil era and to ensure that the UAE remains as one of the highest-ranking nations in the world upon the Center’s 50th anniversary.”