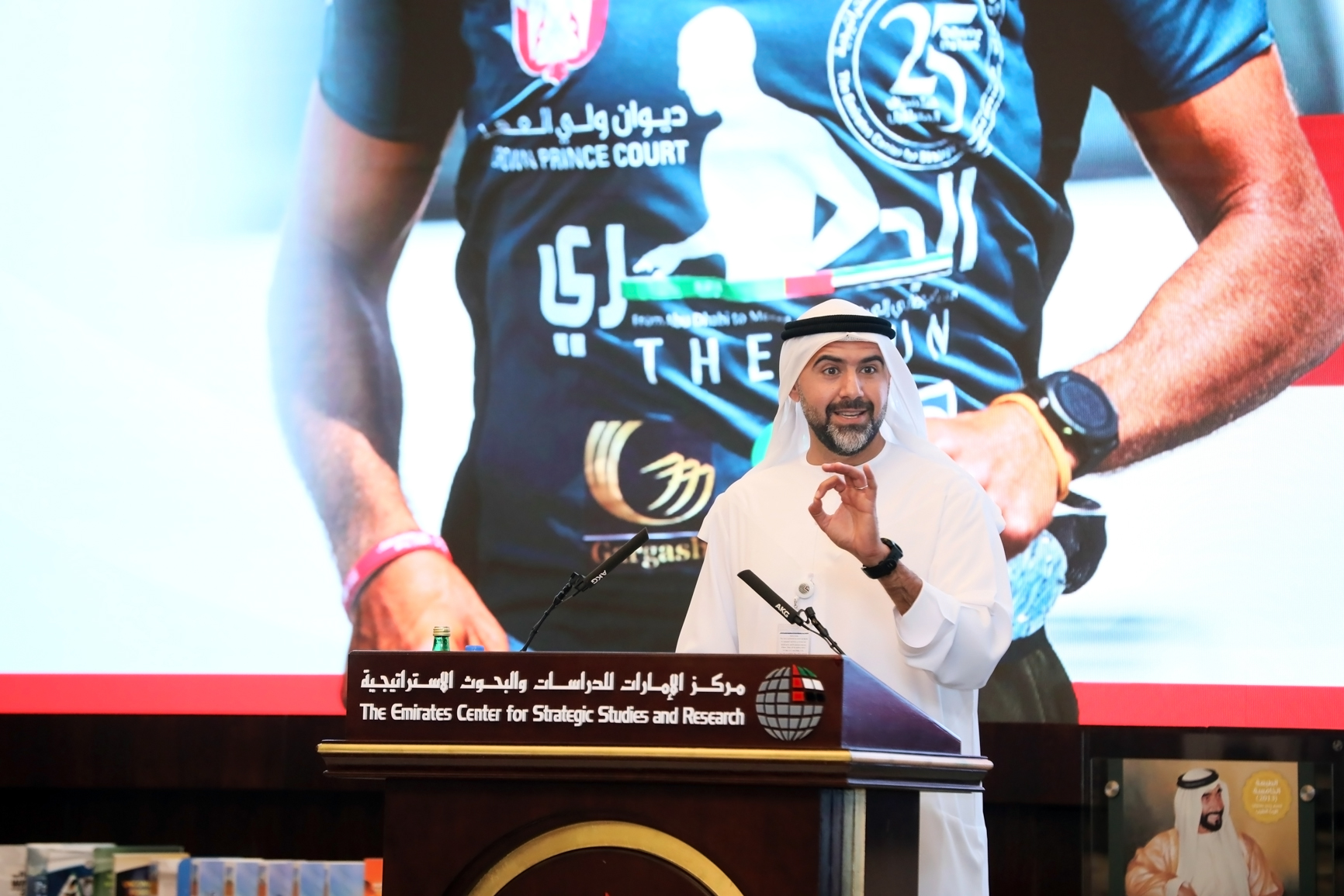 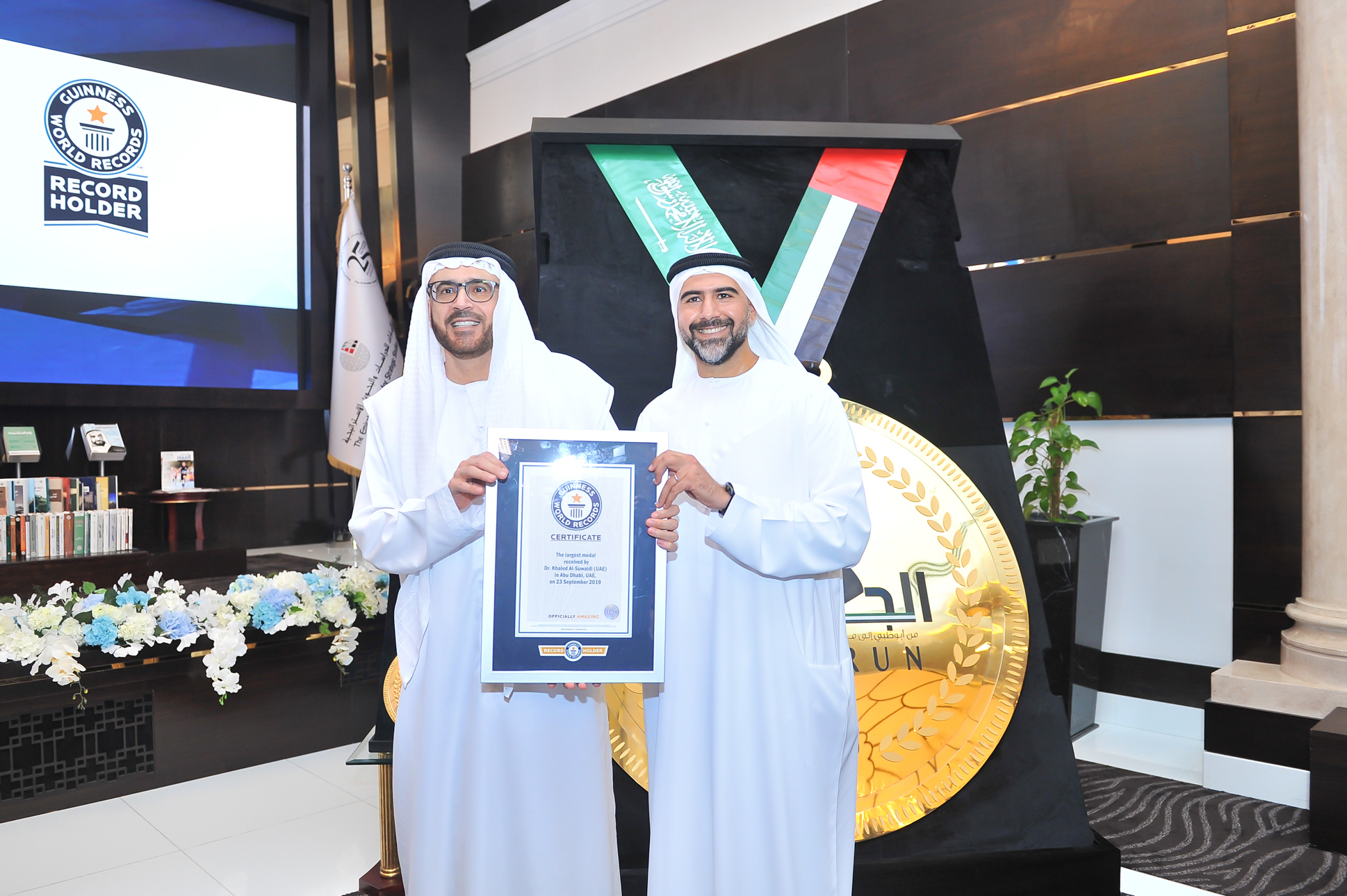 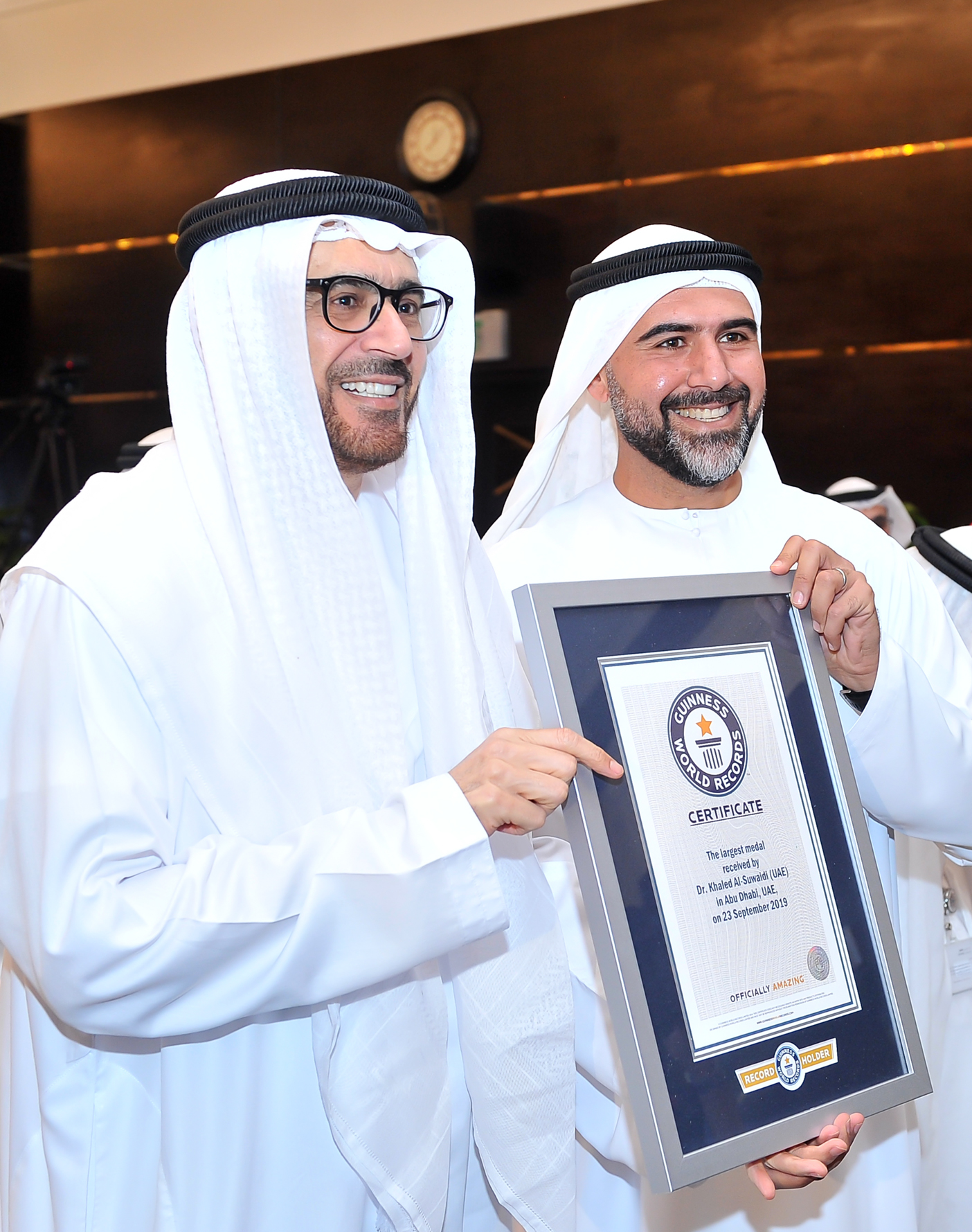 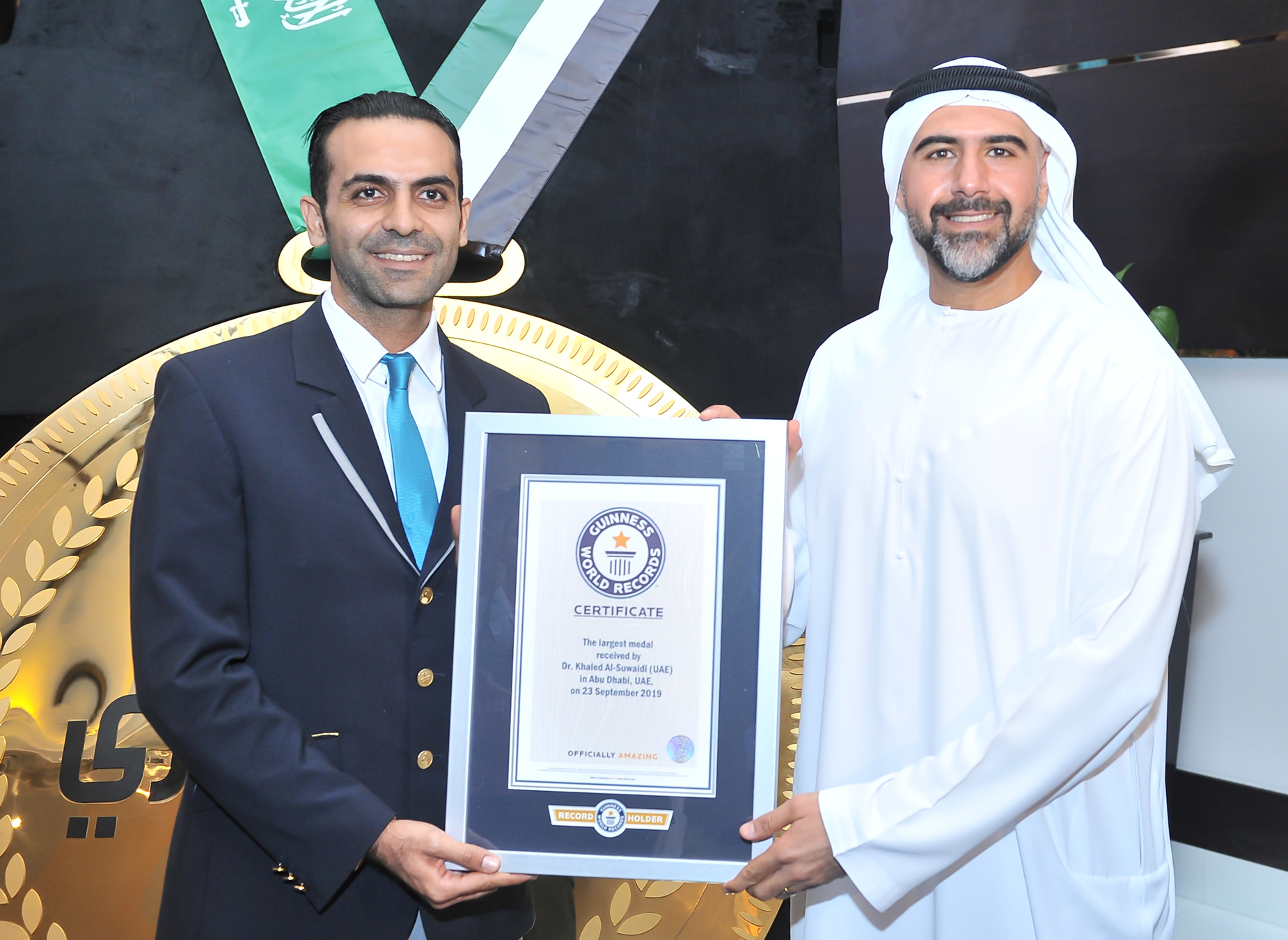 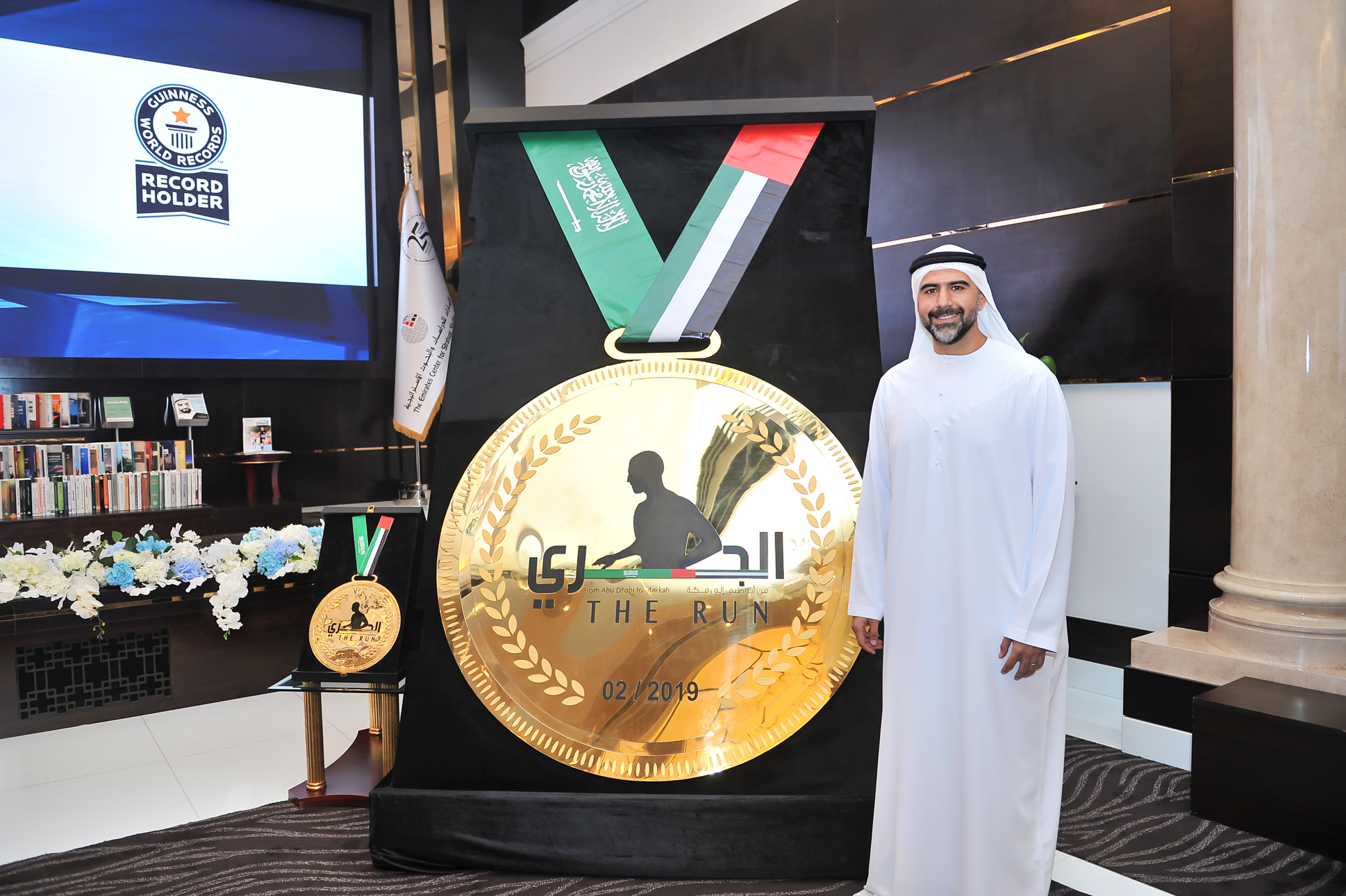 On Monday, September 23, 2019, an event was held in honor of Dr. Khaled Jamal Al-Suwaidi, Executive Director of the Emirates Center for Strategic Studies and Research (ECSSR). He was awarded the largest medal in the world, which has been officially entered as a Guinness World Record, in recognition of his successful completion of the Abu Dhabi-Makkah Run Initiative, which saw him cover 2,070 km in twenty-nine days. He set out from Sheikh Zayed Grand Mosque in Abu Dhabi, in February 2019, reaching Makkah on March 1.

The event started with the UAE national anthem, followed by a welcome speech. A documentary film was shown about the initiative, showing Dr. Khaled’s preparation for the run, as well as the challenges he faced in successfully completing this challenge. The official announcement of achieving the world record followed, before Dr. Khaled Jamal Al-Suwaidi received the certificate from Guinness World Records.

The ceremony continued with remarks from H.E. Prof. Jamal Sanad Al-Suwaidi, Director General of the ECSSR, in which he shared his pride in his son, Dr. Khaled, for successfully completing this unprecedented achievement. His Excellency also congratulated Dr. Khaled on receiving the largest medal in the world, and asked God to bless him, as well as all the youth of our beloved nation, the UAE.

H.E. Prof. Al-Suwaidi highlighted how his son’s initiative highlights a number of very important messages that should be strongly encouraged. Most importantly, the historically solid relations between the UAE and the Kingdom of Saudi Arabia, which are key to regional stability. H.E. Prof. Al-Suwaidi also extended his deepest congratulations to the leadership and people of the Kingdom of Saudi Arabia, on Saudi’s 89th National Day. He wished Saudi Arabia all progress and prosperity.

Prof. Al-Suwaidi reiterated his heartfelt thanks to the institutions and entities that sponsored the Abu Dhabi – Makkah Run Initiative, notably the Abu Dhabi Crown Prince Court. He also gave his special and sincere thanks to Sheikh Shakhbout bin Nahyan Al Nahyan, UAE Ambassador to the Kingdom of Saudi Arabia, for his unlimited support in making this immense challenge a success. Gratitude was also extended to all Saudi personalities, entities and institutions that provided outstanding support for this initiative.

In his remarks, Dr. Khaled expressed his gratitude to those who organized the event, and for receiving the largest medal in the world, which he considers “a source of pride and an incentive in my professional, personal and sports career”. He also explained the various difficulties he faced before and during this unprecedented challenge, voicing his appreciation for the support he received from the wise leadership, that “spares no efforts to support Emiratis”. Dr. Khaled congratulated the Kingdom of Saudi Arabia on the occasion of its 89th National Day anniversary, and praised the support he received at all levels in the Kingdom. Dr. Khaled stressed that his objective was never to gain fame and achieve records, rather he has sought to “send messages, one of which is to remind the Emirati youth that nothing is impossible, as long as there is strong will and determination”.

During the discussion session, Dr. Khaled responded to questions from the audience who congratulated him on this great achievement, wishing him further success and more records.