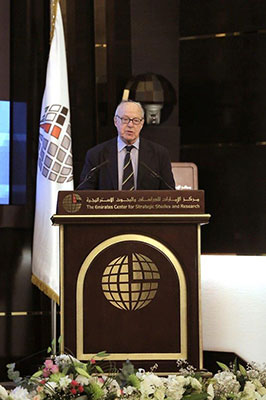 On 17 March 2015, the Emirates Center for Strategic Studies and Research (ECSSR) hosted a lecture – The Importance of Nuclear Energy for the Countries of the World – which was delivered by Dr. Hans Blix, Former Head of the International Atomic Energy Agency (IAEA) and Executive Chairman of the United Nations Monitoring, Verification and Inspection Commission (UNMOVIC) for Iraq. The lecture was part of Khalifa University’s Distinguished Speakers Series and was held in the ECSSR office complex in Abu Dhabi.

During his speech, Dr. Blix said that the world today relies heavily on fossil fuel which contributes around 80 percent of power generated worldwide while nuclear energy contributes 10 percent. He said that it is essential for countries to enter into nuclear energy sector as an alternative for electric power generation, as is happening in Southeast Asia. Industrial progress, he said, is accelerating in most countries and nuclear energy is necessary to meet the demands of increasing population and large electricity consumption. Most of this power is generated using gas and fossil fuels, which adversely affect the environment and human health as a result of gas emissions such as carbon, methane and others. They also deplete the limited sources of fossil energy worldwide, he said.

The speaker noted that owning nuclear power is not easy for any country due to challenges related to nuclear safety and security. With regard to Iran, he said that negotiations are going on with major powers to arrive at an agreement that would ensure the country access to nuclear energy for peaceful and not military purposes. Restricting enrichment levels to the extent that it doesn’t allow production of nuclear weapons will have to be taken into account during these negotiations.

Dr. Blix said that in his position as head of the IAEA he noticed that old nuclear reactors are operational for no more than 20 years as they lack security conditions and standards which the new generation of reactors follows taking into account factors such as safety and preservation of the environment. According to Dr. Blix, modern reactors may serve for up to 60 years without posing a risk to life or environment as they observe maximum safety standards. Dr. Blix noted that nuclear power is safe and clean and allows countries such as the UAE to use it for generating power. This helps serve its future ambitions on the vision of diversification of energy resources to meet increasing demand.

Dr. Blix added that the UAE has taken up the challenge of providing a reliable source of energy to cover a large part of its needs by 2020. This comes at a time when nuclear energy has been identified as an irreversible strategic choice for diversifying energy sources and reducing dependence on oil in response to the growing demand for electricity in the country. He reiterated that safety is of paramount importance and comes first in the UAE’s commitment to the conditions set in place by the IAEA.

He said that the Fukushima incident in Japan is a lesson and an opportunity to improve safety requirements of nuclear reactors and preparing them to respond to emergencies and radiation. He said substantial revisions have been made to ensure safety mechanisms are adopted and potential risks assessed. He said that the world is witnessing rapid developments in nuclear technology and that innovative solutions in safety and waste disposal are critical to energy security. This will be achieved if radioactive waste management is run successfully by building storage facilities, disposing radioactive material with high and medium radiation, and disposal of toxic waste by burying it at great depths.

Dr. Blix said that several signatories to the Non-Proliferation Treaty (NPT), such as Japan and Brazil, are enriching uranium for peaceful purposes. He said that South Korea has 20 nuclear stations and seeks to build more, and that there are 430 nuclear reactors in 31 countries around the world used to generate electricity. He also touched upon natural gas as one of the most significant sources of energy with the demand for natural gas multiplying in recent years as it is an important pillar of modern petrochemical and other industries.

Dr. Hans Blix urged countries around the world to stand up to the problem of global warming, which has become important today. He called for devising of large scale new scientific techniques and intensifying investments in research and development of low-carbon energy, solar energy, or other new scientific techniques, which would make these sources cheaper than fossil fuel in a much less time.

Dr. Blix concluded by saying that international cooperation is essential to the success of efforts aimed at providing safe, clean and affordable energy sources with a tendency toward reducing dependence on carbon energy and development of new technologies less dependent on it. The world today looks up to countries that are capable of making efforts to shift toward economies with reduced dependence on carbon energy and achieving the desired goals. Such a trend undoubtedly represents new horizons, he said.