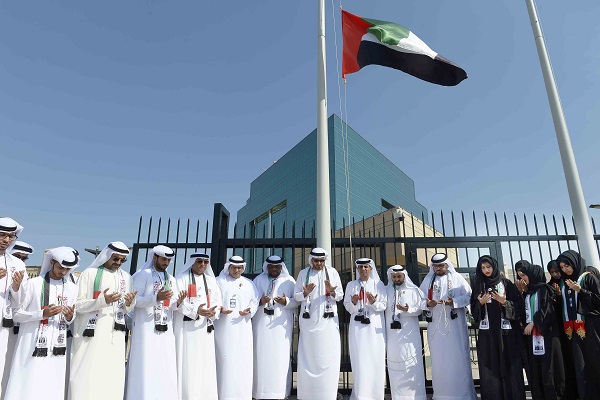 In the presence of H.E. Dr. Jamal Sanad Al-Suwaidi, Director General of the Emirates Center for Strategic Studies (ECSSR) and with the participation of the employees of the center and journalists, the ECSSR commemorated on Monday, November 30, 2015, the first Martyr Day through organizing a series of activities in memory of the martyrs of the nation who gave their lives in the civil, military and humanitarian fields.

The organization of the ECSSR of these activities are reflective of the keen interest attached by the center to celebrating national days and ceremonies because it believes in the importance of these occasions in commemorating milestones in the history of the United Arab Emirates and in raising awareness about these events.

The activities started at 8:00 am with lowering the flag of the UAE. At 11:30 am the participants, with H.E. at the forefront, stood a minute in silent contemplation to pray for the souls of the martyrs. Afterwards, at 11:31 am the UAE flag was hoisted  and the national anthem was played. At 11:35 am, the participants proceeded to attend the inauguration of the Martyr Hall at the ECSSR’s department of public relations in memory of the martyrs of the nation and in recognition for their colossal sacrifices.

On this occasion, H.E. Dr. Jamal Sanad Al-Suwaidi expressed his joy at participating in the commemoration by the ECSSR of the Martyr Day, which is a source of pride for the UAE’s leadership, government and people. This day he said commemorates the fallen in the battlefields who spared no effort to raise the flag of the homeland high. It is also an opportunity to support the families of the martyrs and express recognition for their sincere efforts to raise their children on the values of patriotism, loyalty and devotion to the homeland.

H.E. added that the 30th of November, which the wise leadership choose to be a national day, represents an opportunity to pay tribute to the martyrs of the nation and to express loyalty which is a cornerstone for the stability, security  and the cohesion of society, that the leadership was keen to instill among the sons and daughters of the nation.

In his final remark, H.E. Dr Jamal Sanad Al-Suwaidi reiterated that the ECSSR makes sure to participate in all national days, adding that this participation is in line with the center’s vocation and role in serving society.