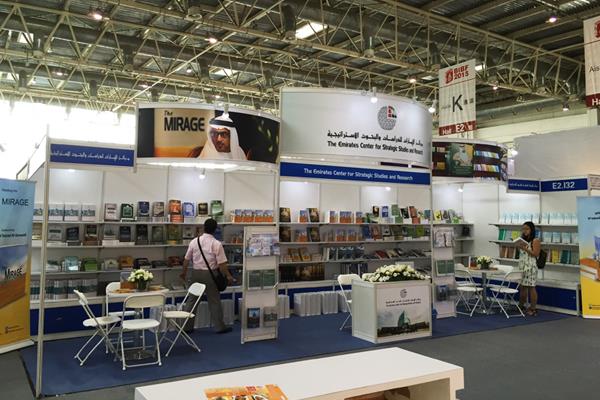 The Emirates Center for Strategic Studies and Research (ECSSR) took part in the Beijing International Book Fair held from 26-30 August 2015. This participation, fourth at this Fair by the ECSSR, was important as the UAE was nominated as 'The Guest of Honor' at the Fair this year. Such a recognition at an international event presented a good opportunity for the UAE to present its cultural image. As a result, the UAE's culture, heritage and the elements of its soft power were promoted during the Fair, which attracted wide international appreciation. The ECSSR's participation at the Fair this year was also notable as it occupied a separate pavilion along with its booth within the official pavilion of the UAE.

The Fair was held at a time when the ECSSR publications have exceeded 1,100, including various series and refereed studies in Arabic and English. These publications are the outcome of research and analyses of various strategic, political, economic, social and information issues pertinent to the UAE and GCC countries in particular, as well as the Arab world along with important regional and international developments.

Beijing International Book Fair 2015 is regarded as one of the biggest book fairs in the Far East. The ECSSR always seeks to make its presence felt in such events and takes the opportunity to exhibit its publications that are commensurate with its cultural mission and aim to be more accessible and approachable to various cultures. The Center also seeks to be closely aware of the most recent scientific and academic publications produced by various international publishers.

Earlirer this year, the ECSSR took part in the BookExpo America in May, London International Book Fair in April, and Paris Book Fair (Salon du Livre) in March. During these events, the ECSSR's publications became remarkably popular among readers, researchers, and intellectuals who are known for offering insightful views on regional and international issues.

At the Beijing International Book Fair 2015, the ECSSR showcased its most recent publication, The Mirage, in both the Arabic and English. The book, authored by H.E. Dr. Jamal Sanad Al-Suwaidi, Director General of the ECSSR, launched its first edition in early 2015. The Mirage has attracted much interest from researchers and academics alike. It has been highly admired and appreciated by Arab and international cultural and intellectual circles.

Among the other books exhibited was Arabic translation of a book The Group That Calls Itself a State: Understanding the Evolution and Challenges of the Islamic State, published in 2015. It is edited by researchers at the Combating Terrorism Center, West Point Academy, New York. The book analyzes the evolution and challenges of the Islamic State in Iraq and Syria (ISIS) most commonly known as Daesh. It also investigates the organizational roots and historical background of ISIS, the reasons of its rise, areas of its activities, and its strengths and weaknesses.

Another ECSSR published book (2014) exhibited at the Fair was Islamic Political Movements and Power in the Arab World: The Rise and Fall, which has been edited by H.E. Dr. Jamal Sanad Al-Suwaidi, Director General of the ECSSR, and Dr. Ahmad Rashad El-Safti. The book evaluates and analyzes the experiences of political Islamist parties and movements when they assume power in certain countries, especially in the wake of the so-called Arab Spring.

Yet another important title exhibited was The Future of Warfare in the 21st Century (2014), which talks about the changing nature of wars, new challenges facing national security, and political and civic aspects influencing future warfare. An encyclopedic book published by the ECSSR in 2014 – Prospects for the American Age: Sovereignty and Influence in the New World Order authored by Dr. Jamal Sanad Al-Suwaidi – was also displayed. The book offers an analytical and objective view of the current world order, and the structure of power distribution within it.

Among other notable books published and exhibited by the ECSSR at the Beijing Book Fair this year was Arabic translated book – The Ottomans: the Dismantling of Images (2014). An interesting book published by the ECSSR – Political Demography: How Population Changes Are Reshaping International Security and National Politics (2014) – focusing on the importance of demographic factors in shaping the political process was also showcased. Another remarkable Arabic translated book showcased was Start with Why: How Great Leaders Inspire Everyone to Take Action (2013), which was included in the list of best sellers when its English edition first appeared.