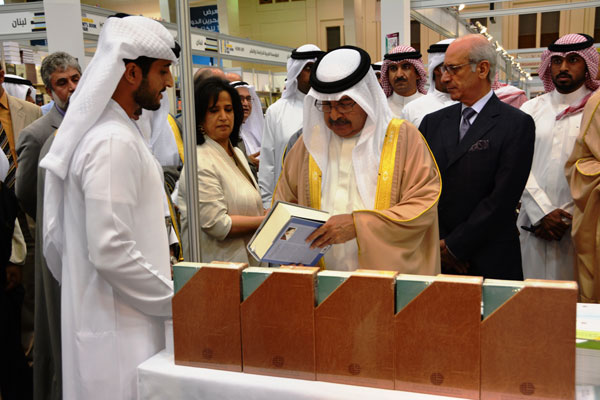 The Emirates Center for Strategic Studies and Research (ECSSR) participated in the 16th Bahrain International Book Fair held from 27 March to 6 April, 2014. The Book Fair was organized by the country’s Ministry of Culture at the Bahrain International Exhibition & Convention Centre (BIECC). The exhibition showcased latest publications in all fields of knowledge, and made efforts to promote the culture of reading and learning in the Bahraini society. The Bahrain International Book Fair had several sections and encompassed a broad spectrum of the publishing industry in the Arab world, foreign titles, children’s books, and teaching and e-leaning resources.

During the book fair, a signing ceremony was held for Prospects for the American Age: Sovereignty and Influence in the New World Order, the latest book by His Excellency Dr. Jamal Sanad Al-Suwaid, Director General of the ECSSR, on Monday (March 31). The ECSSR also showcased a select range of its Arabic and English publications during the book fair. These included both original and translated books written by internationally reputed scholars and experts in the fields of energy, international relations, security, and education. ECSSR publications at the fair included a range of scholarly, refereed studies in Arabic and English analyzing various strategic, political, economic, and social issues relevant to the UAE and the GCC, as well as the broader Arab world and beyond.

These publications attracted widespread interest from readers, intellectuals and professional researchers worldwide and commanded a large domestic, pan-Arab and global readership. The ECSSR’s participation in the Bahrain International Book Fair reflects the Center’s keenness to contribute toward the success of this major event and is in view of the large readership that the Center’s publications have enjoyed in Bahrain over the years.