ECSSR ECSSR NewsAt a Press Conference Held at the ECSSR Complex in Abu Dhabi Dr. Khaled Jamal Al-Suwaidi Commended the Leaderships of the United Arab Emirates and the Kingdom of Saudi Arabia for Facilitating the Abu Dhabi–Makkah Run

At a Press Conference Held at the ECSSR Complex in Abu Dhabi Dr. Khaled Jamal Al-Suwaidi Commended the Leaderships of the United Arab Emirates and the Kingdom of Saudi Arabia for Facilitating the Abu Dhabi–Makkah Run 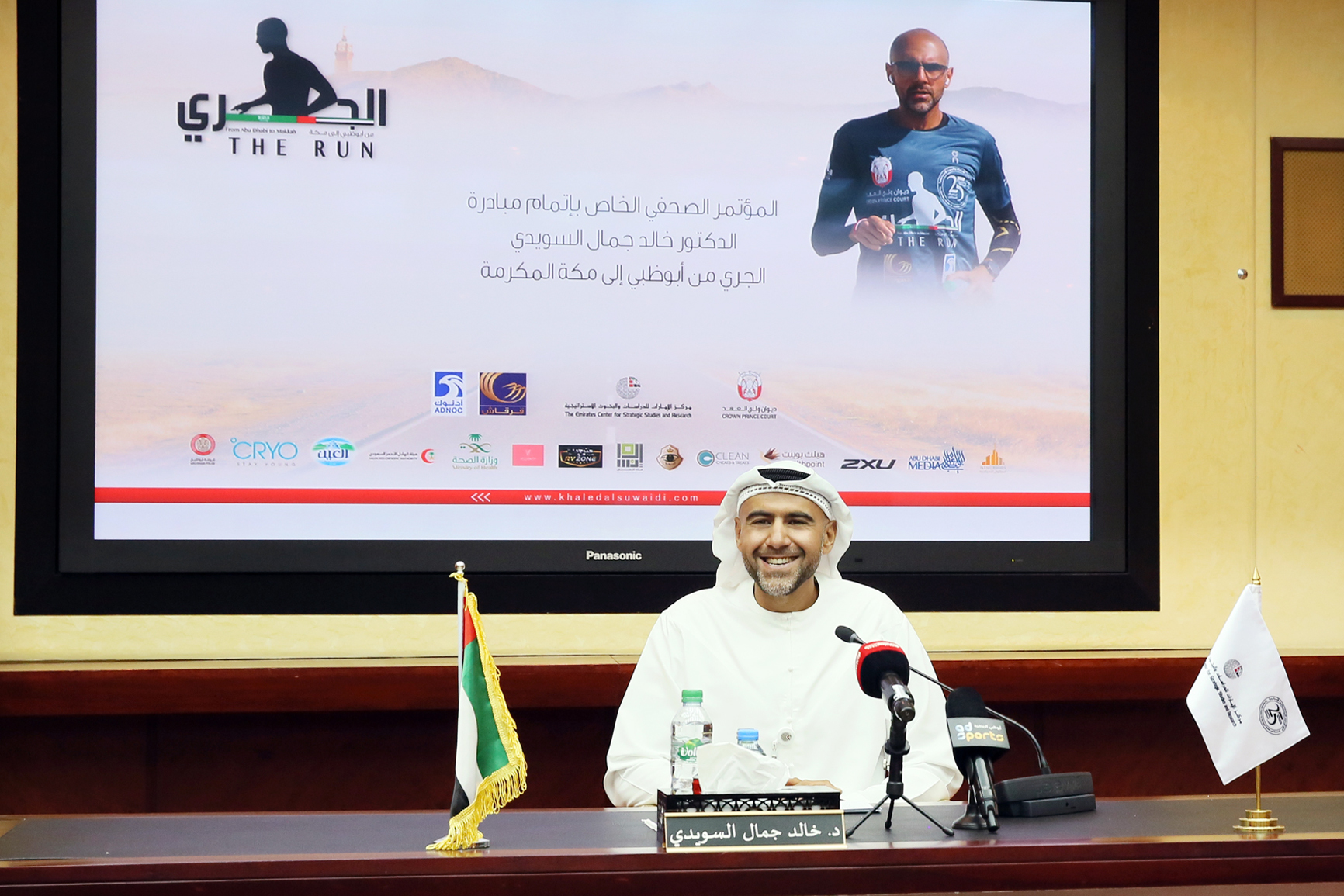 At a press conference on Sunday, March 10, 2019, to announce the completion of the Abu Dhabi–Makkah Run, Dr. Khaled Jamal Al-Suwaidi, Executive Director of the Emirates Center for Strategic Studies and Research (ECSSR), showed his deep appreciation for the strong brotherly ties between the United Arab Emirates and the Kingdom of Saudi Arabia. He said that both countries have been at the forefront of combating those who have attempted to destabilize the region and that this is the reason we are able to live in a safe and progressive environment. He thanked the leaderships in the United Arab Emirates and the Kingdom of Saudi Arabia as well as the citizens of both countries for their support and enthusiasm during his run from Abu Dhabi to Makkah. The press conference was held at the ECSSR complex in Abu Dhabi.
Dr. Khaled said that we are fortunate to have a leadership that has taught us the values behind what makes a great leader. He said a great leader is one that is up close and personal with strength, confidence and commitment and that gives us the ultimate belief that nothing is impossible .
Dr. Khaled said that understanding such values makes us realize that the United Arab Emirates has not progressed through luck. Instead, the UAE has worked hard to get to this point, and it has experienced its share of trials and tribulations. He added that the leadership has taught us that to succeed in life, we as individuals need to strive to be the best version of ourselves every single day. We also have a responsibility to be role models and to take what we have learned from our wise leadership and pass it on to our children.
Dr. Khaled spoke about the sacrifices he made and the obstacles he overcame during his 29-day 2070 kilometers run. He pointed out that we must not forget our fallen soldiers in Yemen as they sacrificed their lives in order to make our lives a safer place. He added that they are the real champions and that they are the ones who gave him the strength to overcome all the adversities that he faced as he ran from Abu Dhabi to Makkah.
At the end of the press conference, Dr. Khaled summarized some of the lessons he learned during his run. He said that preparation in anything we do in life is key. We must face adversity with the mindset that we are willing and able to overcome the hurdles it throws our way. It is only then that we start to grow as individuals. He said his run from Sheikh Zayed Grand Mosque to Makkah was a run that represented not only himself and his abilities, but also every single Emirati and Saudi and their abilities to face challenges and overcome adversity.
Dr. Khaled said he expected to complete the run in 38-40 days. Yet, after fracturing his left foot, he decided that it was time to push the boundaries and increase his daily average from 55 kilometers a day to 70 kilometers a day. He increased his daily average to demonstrate that he was prepared to defeat all the barriers that tried to stop his progress.
Two poets, Khalil Ailabouni and Mansour Batayna, read their poems about “conquering the impossible.”
Journalists asked questions on the importance of the run and the nature of the challenges that Dr. Khaled faced during his run.
Dr. Khaled began his challenge from Sheikh Zayed Grand Mosque in Abu Dhabi at 8:30 AM on Friday morning, February 01, 2019. He reached Makkah on March 01, 2019, in just 29 days.