ECSSR ECSSR NewsAs Part of the “A Book in An Hour” Initiative, The ECSSR Held Its First Session Featuring Ali Abu Al-Reesh Who Said that Sheikh Zayed Managed to Build the Nation with Love

As Part of the “A Book in An Hour” Initiative, The ECSSR Held Its First Session Featuring Ali Abu Al-Reesh Who Said that Sheikh Zayed Managed to Build the Nation with Love 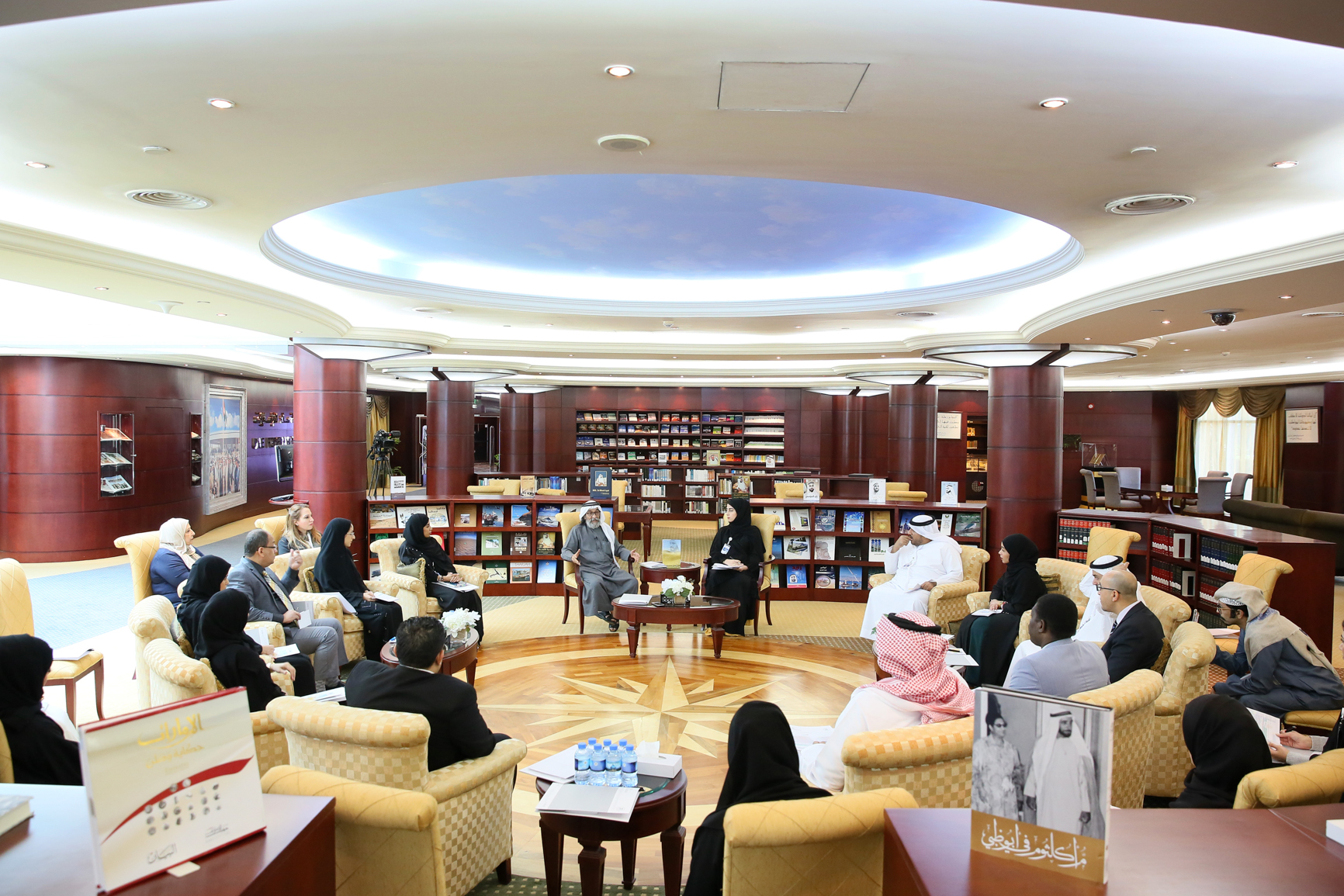 As part of its participation in the national “Month of Reading” initiative, the Emirates Center for Strategic Studies and Research (ECSSR) on Monday morning (March 4, 2019) organized its first of four "A Book in an Hour" sessions. It  featured the esteemed Emirati journalist and writer Ali Abu Al-Reesh, who spoke about his book Zayed, the Exceptional Personality. The writer discussed the ideas, content, and most important topics of his book. He also discussed the motivations behind writing it. The session was held in the UAE Federation Library at the ECSSR.

At the beginning of the session ­ ­­­– which was in the presence of a selected group of journalists, researchers, and ECSSR employees – the writer spoke about the importance of the nation. He commended the level of civilization that has been reached in the UAE, pointing to the efforts and philosophies of the Late Sheikh Zayed bin Sultan Al Nahyan (May his soul rest in peace). He said Sheikh Zayed played a big part in  transforming the nation from “a mere piece of land and people into a nation with a soul and conscience.”

The writer said that Sheikh Zayed’s personality was boundless–describing it as being similar to “picking drops from the vast ocean.” He said that Sheikh Zayed was able to “illuminate the paths of our nation with love,” which was a rare quality among world leaders. Sheikh Zayed was a leader who managed to create the homeland—a homeland that everyone is very proud of. This, he said, was in contrast to many other world leaders who were created by their countries.

Mr Abu Al-Reesh said that Sheikh Zayed was a man who was associated with wisdom. He had many attributes such as virtue, generosity, patience and the love of people—the same attributes that have shaped the qualities of wise personalities throughout the ages. Sheikh Zayed prioritized these values while dealing with people and situations. Those who study the personality of Sheikh Zayed find themselves in front of an exceptional personality full of unique features.

The writer said that the generations that did not live in the era of Sheikh Zayed and did not learn from his experience need the efforts of educational and religious institutions to link them with the human and moral heritage of Sheikh Zayed. The younger generations also need to consult elderly people who have experienced Sheikh Zayed's time and who still hold on to special memories. He said that modern sciences cannot replace the ethical values ​​that Sheikh Zayed passed on to his generation.

The author stressed that patriotism and morality was always present in Sheikh Zayed’ mind and this won the love of the people. Sheikh Zayed combined the love of man, bird, and stone. He understood the meaning of pantheism as he believed in the human being as a human being—irrespective of his religion, color, or race.

In the interactive session,  Mr. Abu Al-Reesh discussed the role of the desert in shaping Sheikh Zayed's personality. He said that the desert  – as a vast space – can purify a person from all negative elements within and can help him meditate to seek wisdom and to build social relations based on love and honesty. The writer said that Sheikh Zayed excelled at integrating ethics into his policy making strategies, because he was honest with himself and with his people.

The book, Zayed: The Exceptional Personality consists of three chapters. The first chapter discusses the theoretical, linguistic, and philosophical framework of the concept of ethics. The second chapter focuses on the bond between ethics and nature in the desert. The third chapter is dedicated to the poetry of Sheikh Zayed and the meaning of wisdom in his poems and its relationship with the desert.

Since 1979, Ali Abu Alreesh has published more than thirty-three literary and philosophical works. These include books, novels, stories, poetry, and thousands of newspaper articles. He also won many awards, and held many high-level positions within the UAE in the areas of media, culture, and heritage.