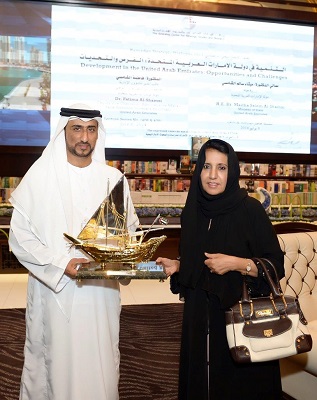 The Emirates Center for Strategic Studies and Research (ECSSR) is taking part in the Alexandrina International Book Fair 2015 being held from 26 March to 7 April. The ECSSR’s participation in the Fair this year coincides with the 21st anniversary of the establishment of the Center. It also marks completion of more than 1,100 publications including refereed scientific studies series, in Arabic and English. These publications explore and analyze various strategic issues of political, economic and social interest to the UAE and the Arab Gulf in particular and important regional and global developments in general.

The most important publication made available at the Center’s pavilion is The Mirage, the latest book by His Excellency Dr. Jamal Sanad Al-Suwaidi, Director General of the ECSSR, which has received wide acclaim and appreciation from politicians, academics and researchers in the Gulf, Arab region and around the world. The central thesis of the book is based on the idea of political mirage, which results from the illusion being created by religious and political groups to people in the Arab and Islamic worlds. The Center will also showcase – Islamic Political Movements and Authority in The Arab World: The Rise and Fall – which has been edited by H.E. Dr. Jamal Sanad Al-Suwaidi. This book evaluates the experiences of Islamist groups in the exercise of power and governance particularly following the so-called Arab spring.

The Center is also displaying the book Unconventional Fossil Fuels: The Next Hydrocarbon Revolution? This book combines the working papers submitted by a group of distinguished experts and academics from the petroleum and energy sector at the 19th ECSSR Annual Conference held from 29-30 June 2013. The book addresses several issues related to what is described as the revolution of unconventional fuels, especially in exploration and development.

Other books showcased at the Fair include Start with Why: How Great Leaders Inspire Everyone to Take Action? The book’s English edition has received wide acclaim and offers a unique perspective on inspirational leadership. The book – The Future of Warfare in the 21st Century – which deals with the changing nature of warfare, new threats to national security and political and civil aspects affecting future wars, is also being displayed.

The ECSSR is always keen to participate in this prestigious book fair, which is held annually in Alexandria, as it looks to contribute toward cultural activities. The Center wants to reach out to readers, intellectuals and researchers at these events which brings book and readers under the same roof. These events maximize the value of reading and encourage the habit of book reading besides promoting cultural activities in the Arab world.