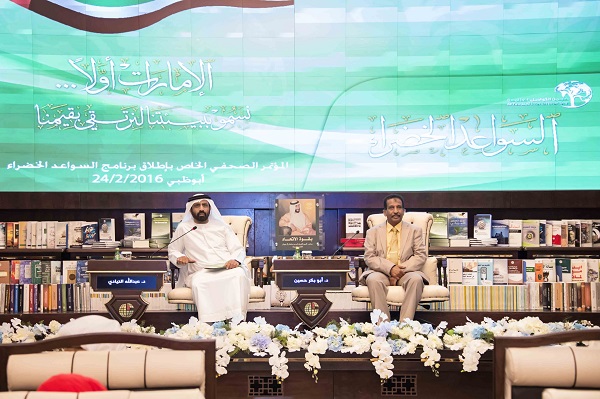 H.E. Dr. Jamal Sanad Al-Suwaidi, Director General of the Emirates Center for Strategic Studies and Research (ECSSR), expressed his delight for having been selected as President of the “Green Hands” program, launched by Al-Tawasol International Tent under the slogan “Emirates First: Better Environment… Higher Values.” Dr. Al-Suwaidi was speaking on the sidelines of the last Wednesday’s press conference (February 24, 2016), hosted by the ECSSR, that marked the official launch of the program.

H.E. Dr. Jamal Sanad Al-Suwaidi expressed his sincere appreciation for the integral role played by Al Tawasol International Tent, which includes the promotion of national development in the UAE and raising community awareness over a number of vital issues. He stressed the importance of the Green Hands program, particularly in terms of strengthening UAE efforts geared toward the protection of the environment and to facilitate sustainable development. Dr. Al-Suwaidi spoke about his willingness and determination to help promote the program itself as part of a concerted effort to further consolidate relations between the ECSSR and Al Tawasol International Tent. He vowed to draw upon the ECSSR’s notable academic, research and intellectual capabilities in support of the Green Hands program and the program objectives.

The press conference was attended by several prominent officials and media specialists. H.E. Dr. Abdulla Al-Neyadi opened proceedings by expressing his thanks to H.E. Dr. Jamal Sanad Al-Suwaidi and the ECSSR for hosting the event, and for the constant support provided by Dr. Al-Suwaidi to Al Tawasol International Tent. Dr. Al-Neyadi added that the ECSSR has become the pride and joy of every UAE citizen—not least because of the informative and culturally refined message the ECSSR disseminates in view of serving the community and the environment. The outreach of such efforts, Dr. Al-Neyadi noted, are felt beyond the borders of the UAE.

H.E. Dr. Abdulla Al-Neyadi confirmed that the UAE represents a unique model in terms of its attempts to preserve and protect the environment against the dangers of pollution. The benefits being reaped today, he asserted, are the result of the considerable efforts made by the late Sheikh Zayed bin Sultan Al Nahyan (may God bless his soul) to promote the importance of the environment in the UAE. For example, the declaration of a UAE National Environment Day, which at the time was an unprecedented gesture in the Arab world, raised the level of interest and concern for the environment across the UAE. The wise leadership of His Highness Sheikh Khalifa bin Zayed Al Nahyan, President of the UAE, His Highness Sheikh Mohammed bin Rashid Al Maktoum, Vice President and Prime Minister of the UAE, and Ruler of Dubai, and His Highness Sheikh Mohammed bin Zayed Al Nahyan, Crown Prince of Abu Dhabi and Deputy Supreme Commander of the UAE Armed Forces has followed in the footsteps of Sheikh Zayed. These leaders have all exerted maximum efforts and energy toward protecting and promoting the environment and are the driving force behind each and every initiative that has contributed to raising environmental awareness in the UAE.

Dr. Al-Neyadi explained that the pro-environment Green Hands program, launched under the slogan “Emirates First: Better Environment… Higher Values,” aims to raise the level of awareness and address a number of pressing environmental issues through the convening of various environment and sustainability-related events and activities. Over the years Al Tawasol International Tent has gained the deserved reputation for playing an instrumental role behind the organizing of such events and activities, including those that have coincided with the UAE National Environment Day, World Environment Day and World Water Day. Dr. Al-Neyadi underlined the importance of promoting further scientific and field research in view of arriving at new, innovative and creative ideas. He added that the UAE, under its wise leadership has clearly struck the right balance between sustainable development and the environment. It has safeguarded the right of future generations to have access to and enjoy the benefits of natural resources and indeed to live a full and happy life.

At the end of his remarks, Dr. Al-Neyadi announced the selection of H.E. Dr. Jamal Sanad Al Suwaidi as President of the Green Hands program, explaining that His Excellency’s vision and experience has served the UAE community so well at the local, regional and international level. Therefore, Dr. Al-Neyadi asserted, these virtues will notably strengthen the Green Hands program and help it to reach its stated objectives.

Dr. Abu Bakr Mohamed Hussein, Envionrment Media Adviser at Al Tawasol International Tent, and author of the Sheikh Khalifa bin Zayed: The Knight of Environment and Sustainability [in Arabic], took to the stage to outline his thanks and appreciation to the leadership of the UAE for all the efforts and initiatives that have been directed toward preserving the environment both at home and abroad. He urged people to help cultivate a culture of environmental awareness from the comfort of their homes; identifying the home and family environment as vital instruments for guidance and education. Dr. Abu Bakr Hussein noted that the launch of the Green Hands program is just the beginning; and requested the attendees to present their ideas and proposals to further develop the program.