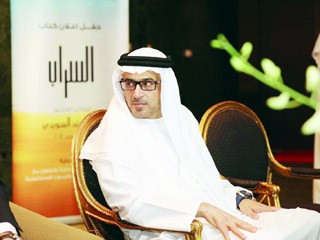 Dr. Sultan bin Ahmed Sultan Al Jaber, Minister of State, Chairman of the Board of National Media Council (NMC) and Chairman of the Coordination Office of the UAE-funded Development Projects in Egypt has received a copy of the book “The Mirage”, authored by Jamal Sanad Al Suwaidi, Director-General of the Emirates Centre for Studies and Research (ECSSR).

Dr. Al Jaber was visiting Al Suwaidi at his office where they discussed the book which addresses the topic of how political religious groups are taking advantage of religion to achieve their own goals including reaching power.

During the meeting, Al Jaber congratulated Al Suwaidi on receiving an honorary PhD degree in political science and international relations from Switzerland’s University of Lugano and becoming a member of the varsity’s academic board.

Dr. Al Jaber said it was an honour for the United Arab Emirates and its people. Dr. Al Jaber described the book as a major work on the issue of political religious groups and ways of countering them and addressing the mirage they are attempting to sell to Arab and Muslim peoples.

The book, he said, is a qualitative addition to Arab and Western libraries in the area of political Islam. Dr. Al Suwaidi presented Dr. Al Jaber with the ECSSR’s memento shield and miniature design of the building of the Abu Dhabi-based think tank.