ECSSR ECSSR NewsThe “A Book in an Hour” Initiative at ECSSR Hosts His Excellency Lieutenant General Dhahi Khalfan Tamim Who Says That Leadership Qualities Were Embodied in the Personality of Sheikh Zayed, the Founding Father of the UAE

The “A Book in an Hour” Initiative at ECSSR Hosts His Excellency Lieutenant General Dhahi Khalfan Tamim Who Says That Leadership Qualities Were Embodied in the Personality of Sheikh Zayed, the Founding Father of the UAE

The “A Book in an Hour” Initiative at ECSSR Hosts His Excellency Lieutenant General Dhahi Khalfan Tamim Who Says That Leadership Qualities Were Embodied in the Personality of Sheikh Zayed, the Founding Father of the UAE 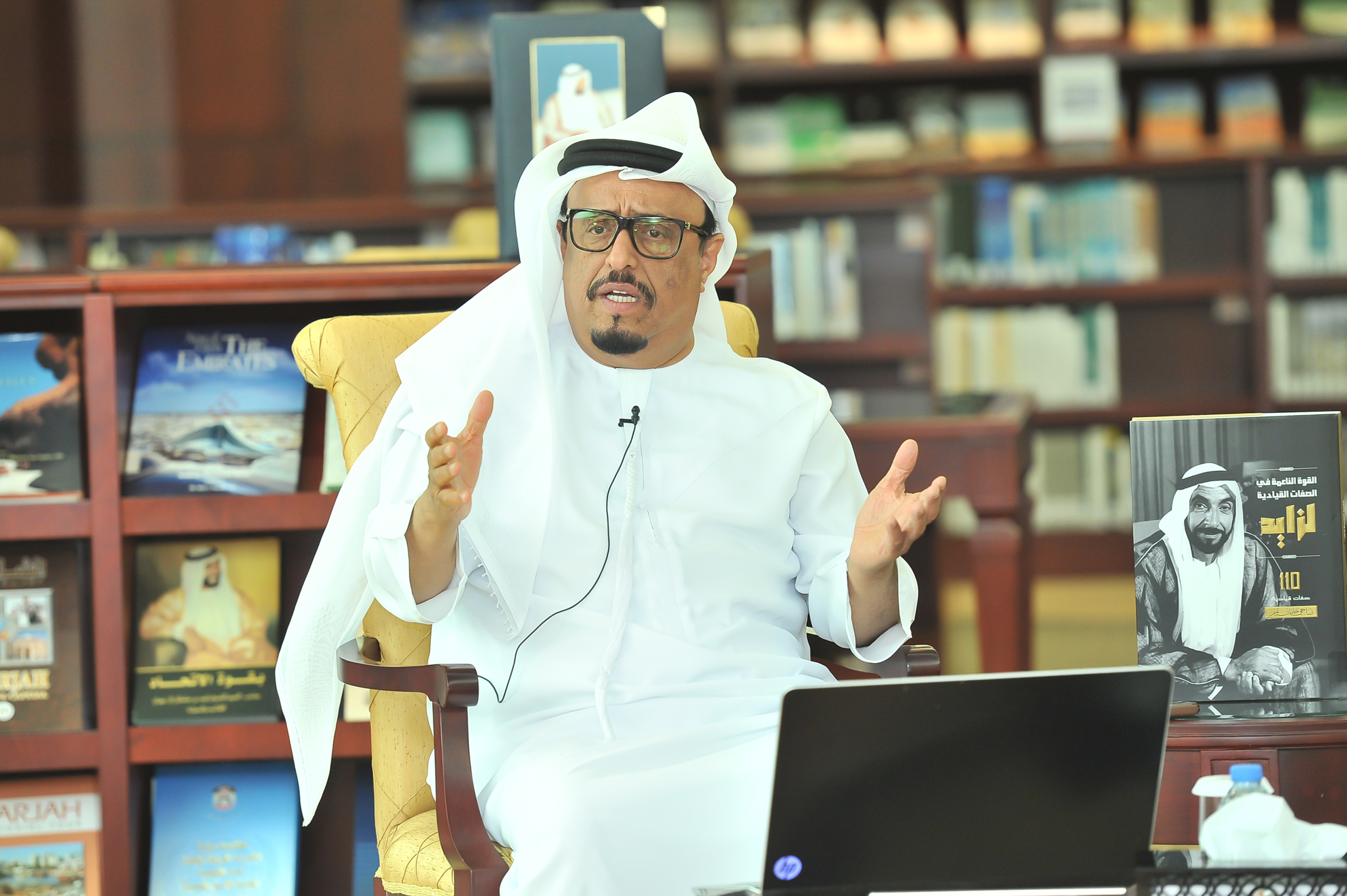 The UAE Federation Library at the Emirates Center for Strategic Studies and Research (ECSSR) hosted its third session of the “A Book in an Hour” initiative on Monday, March 18, 2019. This interactive session featured His Excellency Lieutenant General Dhahi Khalfan Tamim, Deputy Chairman of Police and Public Security of Dubai. He spoke about his book titled, The Soft Power in the Leadership Qualities of Zayed. The event was attended by His Excellency Prof. Jamal Sanad Al-Suwaidi, the Director General of the ECSSR, and a group of academics, media professionals, and ECSSR employees.
During the session, His Excellency Dhahi Khalfan Tamim spoke about his motives for writing the book, the various stages in preparing it, and the ideas and information contained in its pages. He said that his book was published last year, which coincided with the “Year of Zayed,” declared by UAE President Sheikh Khalifa bin Zayed al Nahyan, in 2018.
His Excellency said that he included some of the qualities of the Founding Father in his book without being able to mention all of them. “The Late Sheikh Zayed was not only the leader of the UAE in a specific time frame, but also an exceptional leader in the history of Bani Yas, the region, and the whole world. Because of this, I realized that it was necessary to write this book to answer the questions that future generations will raise about Sheikh Zayed’s personality.”
The author said that it is vital that UAE military colleges teach the leadership qualities of Sheikh Zayed, as a model for inspiring leaders. He also recommended teaching the leadership qualities of other historical figures from outside our social and cultural circles. He said that this would enable the younger generations of the UAE, GCC and Arab region to be inspired by the history, life, and thoughts of Sheikh Zayed as well as other great leaders.
The author mentioned many of the qualities embodied in the personality of the late Sheikh Zayed (May his soul rest in peace). He said that his most notably quality was strategic planning, pointing out that Sheikh Zayed planned to build a state, not only for a limited period of time but one that would last forever. Sheikh Zayed took into consideration the failures of many world leaders to build sustainable societies. Therefore, many nations during the life of Sheikh Zayed (May his soul rest in peace) wished that they were blessed with a leader like him to achieve what he achieved for the UAE and its people.
The author spoke about how tolerant Sheikh Zayed was. He also praised his other qualities including his keen interest in human and economic development, all for the wellbeing and happiness of his citizens.
His Excellency mentioned other traits of Sheikh Zayed. He said that Sheikh Zayed was a good teacher, a social reformer, humble, wise, patient, eloquent, prudent, prompt, and an effective decision maker.
He said that Sheikh Zayed possessed two key qualities of a leader—he was capable of setting priorities and he mixed flexibility with firmness. Sheikh Zayed also ruled within the framework of ethics. Through such qualities, Sheikh Zayed was able to achieve more for the country than what people had expected.
It is worth mentioning that “A Book in an Hour” is an initiative launched by the ECSSR in line with the nation’s “Month of Reading” program, scheduled for March every year. The UAE Federation Library at the ECSSR hosts one prominent writer each week to discuss his book in a dialogue session, throughout the month of March.

Under the direction of H.E. Prof. Jamal Sanad Al-Suwaidi, Director General of the Emirates Center for Strategic Studies and Research (ECSSR), the ECSSR remotely held its symposium No. (59),...
Copyright © ECSSR 2021 All rights reserved | Terms and Conditions | Privacy Policy | Disclaimer | Accessibility